'One really was the clay': What it was like being in the studio with Frederick Ashton.

Fascinating insights from ballet greats into the creative process of The Royal Ballet's Founder Choreographer. 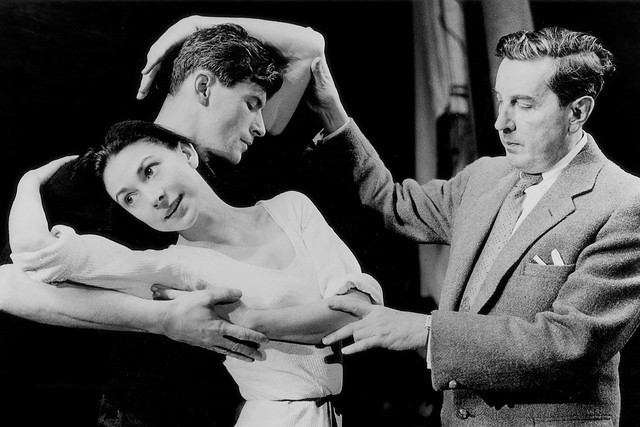 Antoinette Sibley and Anthony Dowell were one of The Royal Ballet’s golden couples, dancers ideally matched in physique, in style, in musicality. They danced together in the classics and in the MacMillan repertory, but their first ballet together was The Dream, Frederick Ashton’s 1964 version of A Midsummer Night’s Dream. It was the start of their partnership, and the start of a close association with the choreographer.

Dowell was very young when he was chosen for The Dream, while Sibley had been in the Company longer and was more anxious about the new role. She was already dancing ballerina roles, but she’d had a bad start in the Ashton repertory. ‘I had so mucked up his White pas de deux in Patineurs. I kept falling down, I spent the whole dance on the ground.’

If Sibley was nervous, so was Ashton. As they go to know him better, Dowell explains, ‘we knew he was dying of nerves on the first day. He would be physically ill, he was so nervous.’ Even so, they didn’t see it in rehearsals. ‘He would come in and sit in his chair,’ says Dowell, ‘and we’d all sit on the floor, and we’d chat. It would be a story he’d remembered, or something that had happened to him that night. You could tell it was a way of putting things off, but it was the most wonderful, relaxing way. Then off he’d go.’

When Ashton came into the studio, he didn’t have steps prepared. ‘We have worked with choreographers who come into the room and teach you,’ says Dowell. ‘They’ve worked it out, with you in mind, somewhere else. With Ashton and MacMillan you had this amazing freedom, a feeling that you could do anything. You’d invent things, with them just watching.’

Sibley agrees: ‘One really was the clay. All he had, when he came in, was the music. He played it to himself all the time at home, and he’d come in with it singing in his heart. Steps were hardly mentioned. It was, “I want a waterfall here,” not “I want glissade, jeté, tendu”. He used these images. You had to imagine how you would see that – you’d jump around, twist and turn. He hated it or he loved it, or he wanted it more so. Always more so!’

With such close collaboration, as Dowell points out, ‘You ended up with a tailor-made role.’ When Ashton asked for waterfalls, dancers tended to respond in the steps that suited them. You can see Nadia Nerina’s buoyant jumps in La fille mal gardée or in Cinderella’s Fairy Spring, Lynn Seymour’s lush movement and beautiful feet in The Two Pigeons or A Month in the Country.

Sibley and Dowell were brilliantly fast dancers, but they also had a long, classical line and long, fluent phrasing. In The Dream, Ashton gave them unusual partnering, with Dowell mirroring Sibley’s movements. ‘Because our proportions were so similar, our line was so similar,’ explains Sibley. ‘He wanted us to echo each other all the way. It was a new thing.’

Now that they teach Ashton ballets, they’re aware of the things young dancers find difficult. Sibley recalls teaching Scènes de ballet. ‘Johan [Kobborg] and Alina [Cojocaru] came to me. They’re both quick, wonderful, amazing dancers, but they said, “They’ve just taught us the finale at double speed.” I said, “That is the speed.” “It can’t be, you can’t point your feet and get in the positions.” But you do it automatically. There’s no thinking “are my feet pointed, am I in fifth?” By that time you’re exhausted anyway. That’s what the music says, that’s what the steps are, you just do it.’

Describing Ashton’s sense of theatre, his attention to detail, they remember his teasing, too. Sibley did dance Lise in La fille mal gardée, Ashton’s lovely pastoral, but didn’t think it suited her. ‘When I said it wasn’t one of my finest roles, he said, “No, you’re far too sophisticated. You don’t look like a peasant.” I said, “Is that good or bad?” “Not good for this ballet,” he replied. Dowell laughs again, with recognition, “You’d never win.”

This article is taken from an article in About the House, the quarterly magazine received by the Friends of Covent Garden.