Much more than a charming set-piece with some snazzy shoes, Ashton’s delightful Lancastrian clog dance draws on traditions that are both English and international. 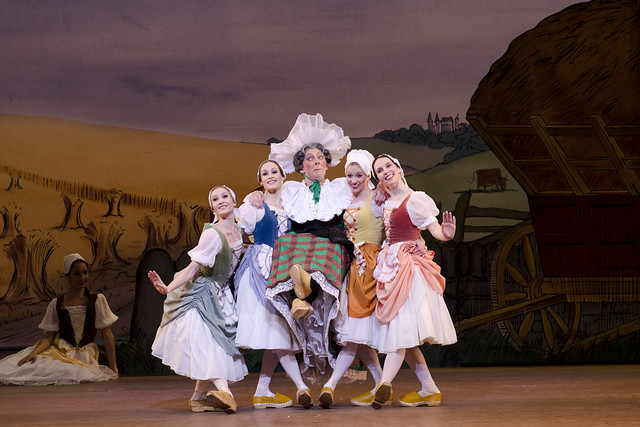 Its French title notwithstanding, Frederick Ashton’s La Fille mal gardée (1960) is a ballet closely involved with Englishness. With set pieces explicitly recalling English folk dances – including the Maypole Dance, so suggestive of English country fairs – the choreography demonstrates the 'English style' with which Ashton is synonymous. While Widow Simone’s famous Clog Dance fits quite perfectly into this rustic English context, it also draws inspiration from slightly further afield.

The English clog dancing tradition harks back to the 19th century, when it became particularly associated with the county of Lancashire. Clogs were a sturdy style of shoe ideal for mining and other manual work, and they were popular in areas including Lancashire well into the 20th century. It was normal for people to be able to dance a few steps in them, and clog dancing competitions were common. This tradition waned over time, but in the 1950s and 60s the British folk revival led to renewed interest. One prominent figure in the revival was an exceptional clog dancer called Pat Tracey, and – according to research by Wilfred Darlington – it may have been her who inspired the Clog Dance in Fille. Tracey died in 2008, but some footage remains of her dancing in 1992:

Some time during the creation of Fille, Ashton took John Lanchbery, who was arranging the score, to a folk dance recital at the Royal Albert Hall which probably featured Pat Tracey. ‘Write something funny to fit that’, he said to Lanchbery, who dutifully wrote a number that adopted the gentle tempo and compound-time ‘hornpipe’ style common in such dances, based around a melody from an earlier score for the ballet by Peter Ludwig Hertel. The choreography, likewise, has more than a hint of the clog tradition: a number of steps, including the ‘break’ figure Simone has when the music pauses, strongly recall the style Tracey danced around the same time.

However, other factors were also key in the creation of the Clog Dance. The first Widow Simone, Stanley Holden, was a skilled tap dancer, and this had a palpable influence on the dance, which contains a number of moves more suggestive of tap than the older clog tradition. What’s more, as the archive footage below shows, another of Holden’s talents was for brilliant characterization, and the Clog Dance owes much of its success to the comic opportunities it offers a gifted dance-actor.

The same can be said for the part of Widow Simone as a whole, which is a character role with a clear debt to another national tradition: the pantomime dame. Ballet has its own history of women playing men, though, and not just the Step-sisters in Ashton’s Cinderella (1948), also panto-like figures. Several ‘travesti’ parts exist in ballets from further afield: notably the witch Madge in La Sylphide (from Denmark) and the wicked fairy Carabosse in The Sleeping Beauty (from Russia) – these parts can be performed by both men and women.

While in some ways the Clog Dance seems quintessentially English, then, in other ways it is bound up with any number of traditions and conventions, both national and international. Just as the English style of ballet only developed through its close early involvement with other styles (Ninette de Valois was a member of the Ballets Russes, for instance, and Ashton’s chief influences included the American Isadora Duncan and the Russians Leonid Massine and Bronislava Nijinska), it is the coming together of so many different elements that makes the Clog Dance the comic and choreographic delight it is.

The production is given with generous philanthropic support from Hans and Julia Rausing and The Royal Opera House Endowment Fund.