Dance Essentials: The Wind in the Willows 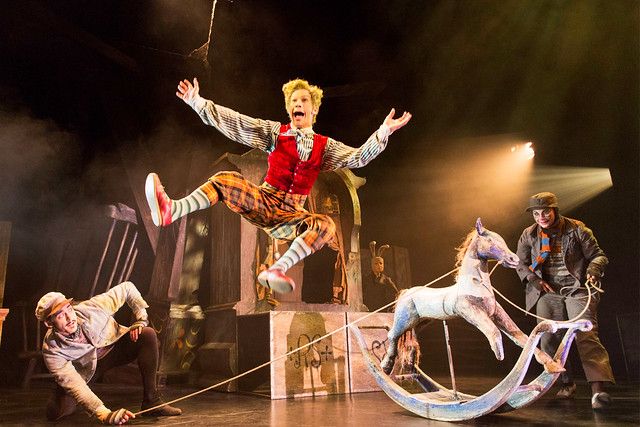 Will Kemp as Ratty, Cris Penfold as Toad and Clemmie Sveaas as Mole in The Wind in the Willows. © Johan Persson

In a dusty old attic the Narrator describes the adventures of four good friends who live on the upper reaches of the Thames… Toad is creating havoc with his obsession with motor cars. His long-suffering friends Badger, Ratty and Mole try to take things in hand – but can they reclaim Toad Hall when it's overrun by Weasels and Stoats?

A Hat-Trick of Firsts

Award-winning choreographer, dancer and director Will Tuckett is a Guest Principal Character Artist of The Royal Ballet. He created his dance version of The Wind in the Willows in 2002 – his first full-length work, and the Royal Opera House's first Christmas show made especially for families. Audiences and critics alike immediately took it into their hearts. After many revivals in the Linbury Studio Theatre, it became the Royal Opera House's first ever West End transfer in 2013, and in 2014 won the Olivier Award for Best Family Show.

The Book that Inspired the Dance

Author Kenneth Grahame was born in Edinburgh but went to school in Oxford, where his lifelong love for the River Thames began. Not allowed by his family to go to university, he started work at the Bank of England in 1879. He rose quickly through the ranks but also began to write, and had his first story published in 1888. The Wind in the Willows began as a collection of bedtime stories and letters for his son Alastair (nicknamed Mouse). Published in 1908, it has become one of the most famous books in the English language.

In creating the music for this stage adaptation of The Wind in the Willows, composer Martin Ward took inspiration from the works of English composer George Butterworth. Butterworth's music evokes the peaceful English countryside perfectly, but Ward wrote entirely new music for the dark, sinister and very un-Butterworth sections of the story. Though only five minutes of music in the whole score is directly attributable to Butterworth, Ward weaves his distinctive sound world throughout.

The Spirit of Collaboration

All the creative aspects of Tuckett's The Wind in the Willows help create its magic. Poet Andrew Motion condensed Grahame's novel into the Narrator's script; as he reads the book in an attic, the characters come alive in front of us. Ingenious set designs by the Brothers Quay turn a roll of silk into a river, and an old chair into a gaol. Nicky Gillibrand's costume designs evoke Grahame's Edwardian world while also giving each character their own distinctive personality. Finally, there are some fabulous puppet designs from Toby Olié – look out for the mean old judge!