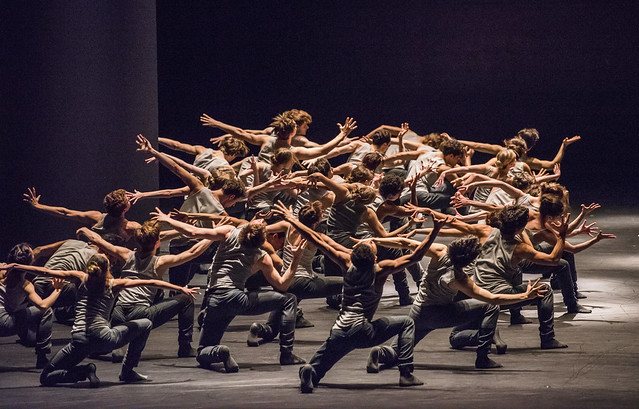 Artists of The Royal Ballet in Flight Pattern © ROH 2017. Photograph by Tristram Kenton

Choreographer Crystal Pite has the dance world at her feet. She’s created works for international companies, and for her own company Kidd Pivot. She’s received numerous awards, most recently an Olivier Award for Betroffenheit, her breathtaking collaboration with Jonathon Young. How did she get to where she is? Speaking shortly before the premiere of her debut work for The Royal Ballet, Flight Pattern, in March 2017, Pite spoke about her influences and the central themes of her work.

Pite began her career with Ballet British Columbia and moved to William Forsythe’s Ballett Frankfurt aged 25. ‘I was really lucky to be able to work there’, she says. ‘It changed everything. One of the things I loved about working with Bill was how reckless he was – how he would throw away entire structures, like 15- or 25-minutes’ choreography, he would just chuck at the 11th hour. He was constantly blowing things up to make space for new things to emerge and he could trust himself to be able to find something new.’

‘I’m not a reckless person in myself’, Pite says, ‘so it was something I wanted to try and cultivate – some more of that kind of irreverence’. After five years with Forsythe, Pite returned to Canada to form Kidd Pivot. The company’s name was inspired by what she had learnt from Forsythe:

‘“Pivot” was a word I settled on because I liked the idea that it was a precise move, something that had a lot of specificity and a certain kind of skill or technique. There was also something of pivotal, like crucial importance. It also changed your direction, it could change your point of view – the idea of pivoting. And then “Kidd” was in counterpoint to that. It was for the outlaw and the pirate and the prizefighter, and this kind of recklessness that I had been so inspired by with Bill, this kind of irreverence and almost brutality, this willingness to take risks and to be unpredictable.’

The tension between these two ideas – as Pite puts it, of ‘rigour inherent in that “pivot” word and the recklessness inherent in the word “Kidd”’ – has become ‘really the engine for everything I do’. The idea informs not only the overarching ideas but the choreography itself: ‘the rigour of trying to achieve something that’s repeatable and has a certain set of ideals; and then in tension with that, the willingness to throw that away and think of the choreography as a kind of map, and just improvise along the map.’

Pite has become famous for works that directly address the major issues of our time – Flight Pattern is a case in point, taking as its focus the refugee crisis. The tension between two extremes becomes a motivator for Pite here, too. ‘It’s the same tension that I feel when I’m over-extended in my capacity to imagine or understand something. Obviously there are plenty of things that I don’t understand, but there are also certain things that actually can’t be understood, ever, by anybody. We’re all in that state of not knowing, we’re all in that state of wondering. I think that’s an interesting place to meet people.’

This idea of communication, of communion, is another important feature of Pite’s work. ‘I want to connect to the audience’, says Pite, and for her, dance has a uniquely communicative power. ‘There’s something about the body which I think we all connect to, even if you don’t dance yourselves. You all know what it feels like to reach or to fall or to be picked up or to hold someone – because you have a language in your own body that you speak fluently, whether you realize it or not. I think that there’s a way of using dance to bypass language, to access parts of people they don’t normally have access to. I think those are all powerful possibilities.’

William Forsythe’s The Vertiginous Thrill of Exactitude runs 18–31 May 2017. Tickets are still available.