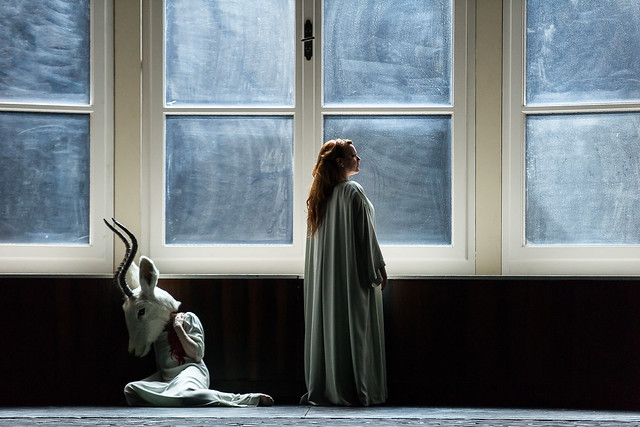 Die Frau ohne Schatten was performed as part of The Royal Opera’s Spring 2013/14 Season to coincide with the 150th anniversary of Richard Strauss’s birth. The co-production with La Scala, Milan received critical acclaim during its time at the Royal Opera House, collecting five-star reviews for its inventive designs and praise for its staging.

The opera marked director Claus Guth’s debut at the Royal Opera House, alongside dramaturg Ronny Dietrich. The production featured designs by Christian Schmidt, as well as video from Andi A. Müller. Semyon Bychkov, who led the Orchestra of the Royal Opera in a number of the performances, has also been honoured for this piece, winning Conductor of The Year at The Opera Awards 2015.

Richard Strauss conceived Die Frau ohne Schatten at the beginning of the 20th century alongside his long-time collaborator Hugo Von Hofmannsthal. The piece explores magical themes, drawing from The Arabian Nights and the Grimms’ fairy tales, reason perhaps for its striking staging that mesmerized audiences and critics alike.

Take a look at a gallery of images from the production here:

Michaela Schuster as Nurse, Emily Magee as the Empress and Johan Botha as the Emperor in Die Frau ohne Schatten © ROH / Clive Barda 2014

Michaela Schuster as Nurse, Emily Magee as the Empress and Johan Botha as the Emperor in Die Frau ohne Schatten © ROH / Clive Barda 2014

The Award for Outstanding Achievement was awarded to dancer Sylvie Guillem.

The South Bank Sky Arts Awards 2015 will be broadcast on Sky Arts on Wednesday 10 June at 8pm. A full list of the winners and nominees has been published on the Sky Arts website.