Choreographer Robert Binet on the power of immersive performance

The Canadian choreographer shares how he brought The Dreamers Ever Leave You to a former print works, where audiences can experience ballet close up. 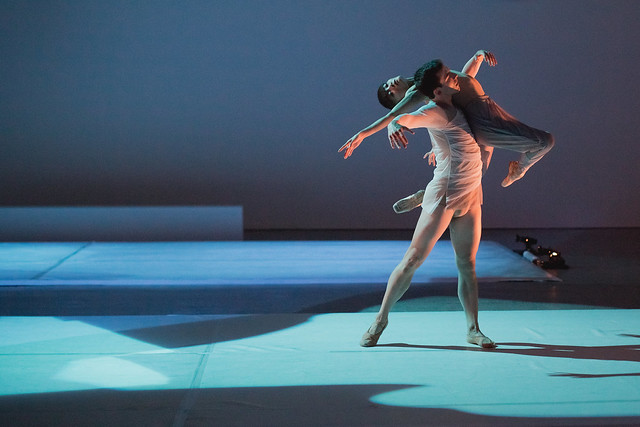 Spencer Hack and Rui Huang in The Dreamers Ever Leave You, The National Ballet of Canada, 2016 © Karolina Kuras

‘New spaces really rev my brain up’, says Robert Binet, the Canadian choreographer bringing his immersive ballet The Dreamers Ever Leave You to Printworks, London, this week. ‘It’s a huge and really cool space. You really feel the history of the printing press – you can see the tracks the newspapers used to fly through and all the loading bays for the trucks. It’s got this amazing historical texture but it’s also a blank canvas – there’s something stunning about wide open spaces, in the natural world especially, but also man-made ones like this’.

Binet’s inspiration for the ballet, which was first performed at the Art Gallery of Ontario in Toronto in 2016, was the paintings of Canadian artist Lawren Harris. Harris’s landscape paintings reduce experiences of the natural world – especially his sparse, arctic scenes – to their core elements, highlighting the spiritual power and magnitude of the landscapes.

‘Harris is an artist I’ve always loved’, says Binet. ‘He was painting these images before we had much photography or film, so he kind of created Canada’s image of the North. I wanted to humanize the energy Harris captures and try to make it more accessible – I think ideas are always more relatable when they are explored through humanity’.

The piece is performed to new music by Canadian composer and pianist Lubomyr Melnyk, who set two world records in 1985 as the fastest piano player in the world – he can play more than 19 notes per second on each hand. His technique of ‘continuous music’ (a combination of classical and minimalist piano styles) with its rich, layered and cascading texture, conjures a mystical atmosphere of what the Canada Globe and Mail in 2016 described as ‘a powerful feeling of incomprehensible forces, of spiritual beauty and underlying risk’.

‘I was thrilled when Lubomyr agreed to make new music for this ballet’, says Binet. ‘He’s created about 14 movements but for each movement there’s a theme that he improvizes. The dancers know the themes really well but the order of the movements will often change or will be played a little differently. I’ve asked the dancers to let the changing music and light infuse their bodies so their performances vary every time too.’

The audience also have the power to control their experience of the performance by moving around the venue's large open space. As Binet explains, this certainly has its advantages and opportunities for innovation: ‘You have to approach every element afresh, which makes it more conducive to creativity,’ he says. ‘Sometimes it’s easier than more traditional venues because, while the choreography needs to look good from every angle, it doesn’t need to look its best from just one angle.

‘When you’re creating for a theatre the audience shows up, sits down and we lift the curtain. With this piece we’ve had to take a more holistic approach: I’m choreographing the audience’s experience as much as the dancers. I’ve worked hard to ensure the focus pulls from one side of the room to the other; in Toronto, where it was first performed, some people would scurry around after their favourite dancer while others would stand in the back corner and take it in from a distance. I hope giving people a flexible experience like this raises the odds of them connecting with ballet and dance.’

Share your photos of The Dreamers Ever Leave You, which is performed at Printworks London on 12 and 13 October, with #DreamersInLondon

This interview is adapted from a conversation which took place between Gerard Davis and Robert Binet, which is available in the performance programme.

This article has been categorised Ballet and tagged Ballet, by Robert Binet, immersive, Lubomyr Melnyk, National Ballet of Canada, Printworks, Social Media, The Dreamers Ever Leave You