The influential playwright wrote Mahagonny at a transitional time as he turned towards Marxism, and further developed his theories of epic theatre.

Bertolt Brecht’s libretto for Rise and Fall of the City of Mahagonny engages directly with contemporary society – so much so that his critique of consumer capitalism and commodified human relationships is as relevant to 21st-century China as it was to the USA and Germany in the Roaring Twenties of the last century.

Brecht and Weill were leading lights in the new generation of left-wing modernist writers and composers in the latter years of the Weimar Republic, and here too Mahagonny has a special status. It is the defining example of Brecht and Weill’s emerging conception of epic opera, and in Brecht’s case was the catalyst for his best-known essay on the nature of epic theatre, together with its catchphrase ‘the modern theatre is the epic theatre’.

Mahagonny was first performed at the Neues Theater in Leipzig on 9 March 1930. The premiere was overshadowed by the impact of the Wall Street Crash in October 1929, which precipitated an economic and political crisis that affected Germany more profoundly than any other European country. A year later, the parliamentary election of September 1930 signalled the death-knell for the Weimar Republic, as the National Socialist Party moved from the political margins to centre stage.

The Nazi Party’s extreme right-wing political stance was reflected in its aggressive cultural radicalism, which anathematized all forms of avant-garde art. The premiere of Mahagonny, as the Weimar Republic was moving into a state of crisis, presented Nazi activists with an ideal opportunity to demonstrate their opposition to the Republic and its left-wing modernist culture, as epitomized by Brecht and Weill. Nazi Brownshirts demonstrated in front of the theatre prior to the premiere, which was severely disrupted – especially in the final act. 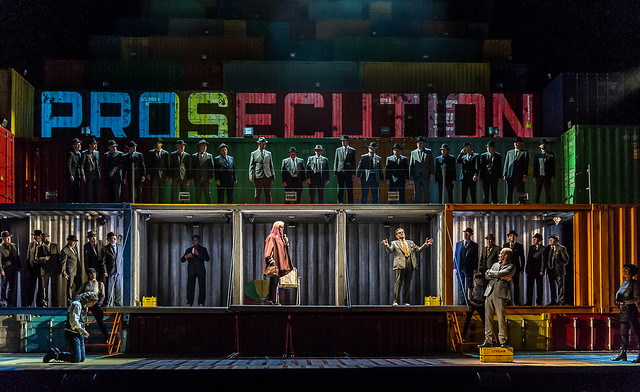 Production Photo of Rise and Fall of the City of Mahagonny © ROH.Clive Barda 2015

The final scene of the opera presents the city of Mahagonny as a capitalist dystopia, its last days dominated by confusion, hyperinflation and the enmity of all against all. Just before his execution, Jimmy had realized that authentic joy and freedom cannot be purchased, and that fundamental human needs cannot be satisfied in the prevailing socio-economic order. His last words – ‘I ate and was never full, I drank and was always still thirsty. Somebody give me a glass of water!’ – recall those of Jesus Christ on the cross just before he dies. But his positive message, encouraging the audience to contemplate an alternative social order, is overwhelmed by the bleakness and despair of the opera’s finale and its desperate closing words: ‘Nothing can be done to help the living.’

Brecht wrote three versions of the libretto for Mahagonny. The first was in place by the end of 1927 and largely resembles the second version, published in November 1929. The 1929 libretto, which was used for the Leipzig premiere, is often taken to be the ‘standard’ version. In the wake of the premiere, however, Brecht made further significant revisions to the libretto, assisted by Elisabeth Hauptmann, and published what for him was the ‘definitive’ text at the turn of 1930–31, together with his influential ‘Notes to the Opera Rise and Fall of the City of Mahagonny’. 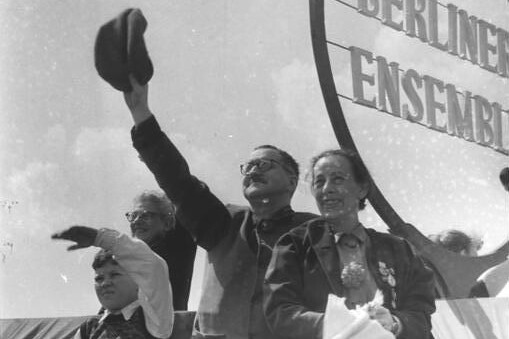 Bertolt Brecht and Helene Weigel of the Berliner Ensembles on 1 May 1954. Photo by Horst Sturm in the German Federal Archives

This period from 1927 to 1931 marked a key transition in Brecht’s career, as he became increasingly interested in and committed to Marxism. His development as a playwright and theorist and practitioner of epic theatre has been taken to mirror this paradigm shift in his political sensibilities – not just in terms of the new sociological preoccupations that mark his work of the late 1920s and early 30s, but also in relation to his rewriting of his own plays.

Mahagonny holds a central position in this transitional phase, and has been seen as a Janus-faced work ever since its premiere. It seems to hark back to Brecht’s earlier work, yet also appears to be scathingly critical of the excesses of a capitalist society dominated by money and consumption. In fact, all three versions of Mahagonny are clearly in line with Brecht’s developing aesthetic of epic theatre: they are experimental, rethink the role of the audience and engage with key aspects of modern society, notably the power of money.

Rise and Fall of the City of Mahagonny runs until 4 April 2015. Tickets are still available.
The production will be broadcast live to cinemas around the world on 1 April 2015. Find your nearest cinema.