Top music videos prove that ballet can enrich a range of sounds and elevate songs to a whole new level. 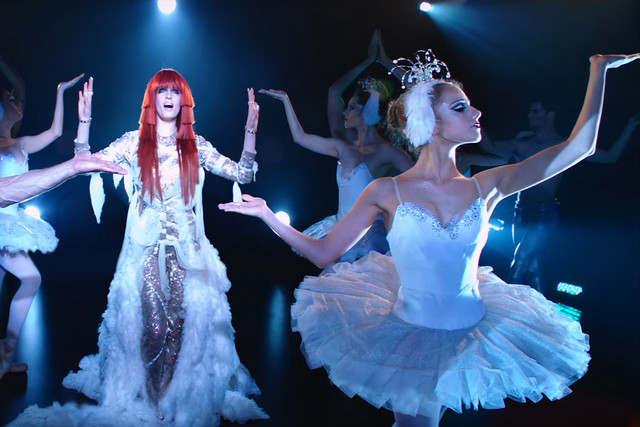 With multi-million dollar budgets, high production values and starry casts, there's no denying the marketing value of a powerful music video. David Bowie's video for Ashes to Ashes was the first to cost more than $500,000 and it wasn't long until the rest of the music industry followed suit, with artists like Michael Jackson, Madonna and Beyoncé spending millions more, transforming their videos from marketing material into works of art.

It's perhaps not surprising that music video directors swiftly turned to the world of ballet and contemporary dance to enhance and elevate their creations, combining pop and classical ballet to striking effect. Here are a few of our favourites.

Sia's music video puts dancer Maddie Ziegler as the primary focus in this astounding balletic routine. The video has been watched more than 1.5 billion times making it one of the most viewed videos on YouTube ever.

Queen – 'I Want to Break Free'

The second half of this video include a routine performed by The Royal Ballet and choreographed by Wayne Eagling, a former dancer with the Company. To enable him to better portray legendary Russian dancer Vaslav Nijinsky in the Afternoon of a Faun-inspired clip, legendary frontman Freddie Mercury shaved his famous moustache.

Sting – Prelude from Cello Suite. No. 1

Florence and the Machine – 'Spectrum'

Director David LaChapelle enlisted several ballet dancers of California's Southland Ballet Academy to jump around the English musician. LaChapelle said he wanted to reflect the song's infectious sense of ‘light, positivity and authentic joy' through the choreography. Clearly a fan of ballet, Florence and the Machine granted the Royal Opera House the use of their track 'No Light, No Light' for our 2012 promo film High Flyer, which features Principal Dancer of The Royal Ballet Edward Watson.

‘I am a fervent believer that dance is the body’s way of communicating when the voice cannot,’ says ELY, the director of this explorative video. It opens with an elderly woman alone in an art studio. As dancers begin to infiltrate the space, it becomes clear that they are characters who have escaped from paintings.

Over ten minutes of contemporary dance is contained in this beautifully shot film from Icelandic post-rock band Sigur Rós. Two dancers meet inside an abandoned old building and as the track builds, meet to perform a passionate pas de deux.

In this video, frontman Chris Martin dons a large inflatable ballet suit and stumbles into a ballet performance. The video ends with him finding his perfect partner, who wears an inflatable tutu.

Released in the aftermath of an awkward moment at the Video Music Awards in 2009, West's lyrics show his acceptance of the media’s negative perception of him. They are repetitive and crude, which deliberately jars against the beauty of the ballerina's routine.

Belle and Sebastian – 'The Party Line'

Former Choreographic Apprentice of The Royal Ballet Robert Binet created the choreography for the cult Scottish indie pop band. Set in a club, a woman appears to imagine a couple performing a beautiful pas de deux, instead of the drunken 'bump and grind' dancing that is taking place in reality.

Caroline Polachek of Chairlift reportedly practised for two months to perfect her interpretative dance style. It's easy to notice the influence of classical ballet – noted choreographer Juri Onuki (who also worked on Blood Orange's I Know) assisted her on the routine.

Hozier – Take Me to Church

Taylor Swift – Shake it Off

Taylor Swift’s smash hit from her fifth album 1989, includes the singer performing a range of dance in different genres from hip-hop to jazz – but the video opens at the barre with a troupe of ballerinas.

Did we miss any? List your favourite music featuring ballet dancers in the comments below.