A quick guide to the classic Christmas favourite. 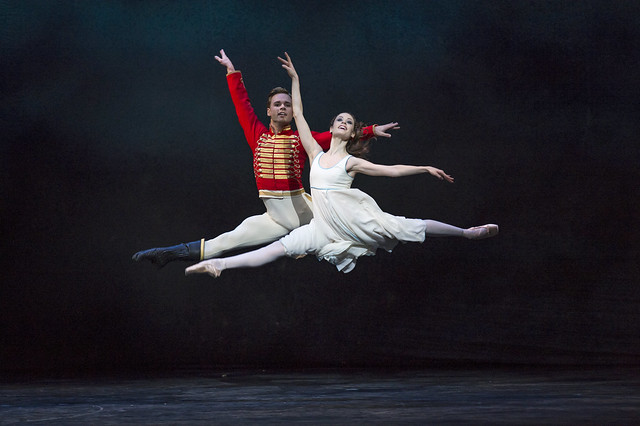 Emma Maguire and Alexander Campbell in The Nutcracker © ROH/Bill Cooper, 2012

At a Christmas party hosted by her parents, Clara receives the gift of a Nutcracker doll from the magician Drosselmeyer. Later, when all the guests have left and the house is asleep, she discovers that the Nutcracker is enchanted, and is swept away on a magical adventure…

The story for The Nutcracker was adapted from E.T.A. Hoffmann’s Nussknacker und Mausekönig, a dark fairytale written in 1816. The original ballet, choreographed by Marius Petipa and Lev Ivanov, in fact followed a more lighthearted reworking of the story by the French author Alexandre Dumas. It was given a poor reception at its premiere in 1892 at the Mariinsky Theatre, St Petersburg, but has since been re-created in numerous productions and become a favourite with audiences around the world.

Peter Wright’s exquisite 1984 Nutcracker for The Royal Ballet recalls the lavishly traditional air of the original production, with some changes to the scenario to bring it closer to Hoffmann's original story. With magnificent designs by Julia Trevelyan Oman, including a gorgeously decorated tree that magically grows, and beautifully coloured imaginings of the fantastical Sugar Garden, this festive production has become a much-loved staple of the Company’s repertory.

A Symbol of Christmas

Tchaikovsky’s music for The Nutcracker is one of the most popular ballet scores of all time. From the flurrying sounds of the Waltz of the Snowflakes to the wildly energetic Trepak Dance, the composer’s memorable melodies and rich, varied orchestrations have become indelibly linked with the celebration of Christmas.

Wright’s adaptation of the choreography for The Nutcracker is characterized by buoyant footwork and lyrical freedom in the arms and upper body. Perhaps the best-loved number from the ballet is the dance of the Sugar Plum Fairy in Act II. Comprising sharp, filigree choreography and lasting for ten minutes, it is one of the longest and most technically challenging solos in the repertory, and a role that many ballerinas long to dance.

This article has been categorised Ballet and tagged background, Ballet Essentials, by Peter Wright, essentials, Hoffmann, Production, Tchaikovsky, The Nutcracker