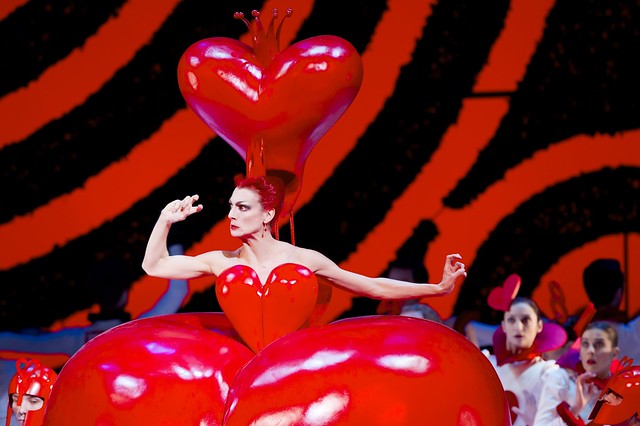 Henry Liddell, the Dean of Christ Church College, Oxford, and his wife are hosting a garden party. Alice is saddened to see her friend Jack, the gardener’s boy, sent away in disgrace. Lewis Carroll, a lecturer in mathematics and friend of the family, consoles her by offering to take her photograph. He disappears beneath the camera cloth and, to Alice’s surprise, emerges as a White Rabbit. When he bounds into his camera-bag and vanishes, Alice follows him, and falls… and falls… and falls…

A Rabbit’s Tale for Alice

Alice’s Adventures in Wonderland was published in 1865 by the English author Charles Lutwidge Dodgson under the pseudonym Lewis Carroll. The novel was inspired by a story Dodgson told Lorina, Alice and Edith Liddell – the daughters of the Dean of Christ Church College – which Alice asked him to write down for her. Its lively fantasy world, vivid characters and logical games beneath the surface have inspired countless adaptations, especially in film and theatre.

Christopher Wheeldon's 2011 ballet Alice's Adventures of Wonderland was The Royal Ballet's first commissioned full-length ballet in more than twenty years. Royal Ballet Principal Edward Watson, who created the role of the White Rabbit, describes Alice as ‘one of those brilliant ballets that appeals to everyone’. The colourful fantasy world and curious creatures of Carroll’s story immediately captivate younger audience members, while Wheeldon’s choreography – which varies between wry understatement and joyful exuberance – along with stunning stage effects and projections by Bob Crowley and Jon Driscoll make Alice a treat for all the family.

Wheeldon’s choreography for Alice is remarkable not just for its inventive use of classical ballet, but also for the wide variety of other dance styles it incorporates. These range from the sinuous, contemporary dance movements for the Caterpillar to the Mad Hatter’s animated tap dancing, and are used by Wheeldon to highlight the quirks and idiosyncrasies of his characters.

The Sound of Wonderland

Joby Talbot’s score for Alice’s Adventures in Wonderland has been described as ‘sublimely witty… a lush soundscape that drives the action’. One of its most striking features is the variety of unusual techniques and instruments that Talbot uses to match Wheeldon’s distinctive characters. These range from a violin tuned up a semitone for the ‘highly-strung’ Queen of Hearts to a celesta and ram’s horn trumpet for the White Rabbit, and North African percussion for the Caterpillar.

The production is supported by Boodles and is given with generous philanthropic support from Kenneth and Susan Green, Doug and Ceri King and The Royal Opera House Endowment Fund. It is a co-production with The National Ballet of Canada.