Anvils as instruments? Why every orchestra could do with some heavy metal

How an enormous block of steel became a big hit on the opera stage - and beyond. 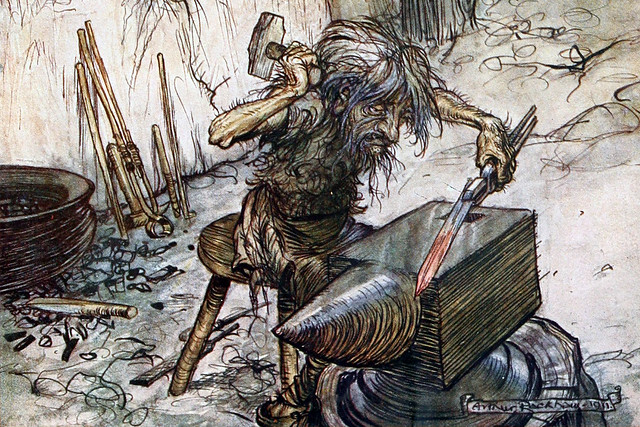 Mime at the Anvil from Siegfried and the Twilight of the Gods, illustrated by Arthur Rackham, 1911

As any cellist, harpist, or (perish the thought) double bassist will tell you, there are few things more annoying than lugging your over-sized pride and joy to and from rehearsals, jamming it into the back of a car, crushing through the barriers on the tube, or inelegantly dragging it up and down flights of stairs.

These are the large instrument-playing unfortunates who are routinely pestered with that most infamous of muso cat-calls: 'Bet you wish you'd taken up the flute?'.

Spare a thought, then, for the ill-fated player of an altogether more cumbersome orchestral instrument: the anvil.

The epitome of a heavy and clumsy object - perfect for dropping onto a cartoon villain should the need arise - this hardened steel surface is designed to be struck with an enormous hammer; the larger the better. A fact which makes its popularity on the opera stage, most notably, in Verdi's smash hit, Il trovatore, all the more surprising. How on earth are performers expected to get it to and from the rehearsals (and, of course, the pub afterwards)?

While this line of argument is, of course, to be taken with a hefty pinch of salt, the fact is that this unlikely hunk of metal has made quite an impact on the world of classical music. Despite its size and its hugely limited range, this forged steel block is a key player in Verdi's middle-period masterpiece, in the unimaginatively nicknamed 'Anvil Chorus' (otherwise, known with much more zip as the 'Coro di zingari'). Verdi's musical direction in the score is that the singers, not the percussionist, should be the ones to hit the anvils in time to the music, with basses playing on the beat, and tenors on the offbeat. As the large Italian chorus sing the praises of hard work, good wine, and gypsy women, the effect is striking in every sense of the word: the dull chime of the anvil adds a unique tone to the now famous tune, and there's something quite hypnotic about the view of a stage full of people hitting hammers on every other beat as they sing.

But it's not just Verdi who saw the anvil's potential on the opera stage. Wagner, true to form, pushed the boat out in Das Rheingold, using not one, but 18 anvils - nine small, six medium, and three large - tuned to F three octaves apart. Siegfried, too, made use of the instrument's trademark timbre, unsurprisingly in the 'forging song', 'Hoho! Hoho! Hohei!', as Siegfried carefully crafts his sword. Wagner's considerable influence on heavy metal has never been more literal.

When attempting to bring suitably metallic pieces to life, other big-hitting composers turned to the anvil: Britten and Walton both used the instrument to conjure a ‘Babylonian’ sound in their works. In The Burning Fiery Furnace, Britten uses the anvil, alongside a lyra glockenspiel and small cymbals to take his audiences back in time, musically. Walton, too, in Belshazzar's Feast, puts the metallic sound to good use in ‘Praise’: as the chorus sing praises to the gods of various materials, the composer brings appropriate instruments to the fore – trumpets for the god of gold, flutes for the god of silver, and anvils for the god of iron.

More recently, anvils have made their mark in the worlds of film music, minimalism, and pop, as composers used the instrument’s metallic properties to add depth to their pieces. Howard Shore, John Williams, and James Horner have each used it in film scores, and Louis Andriessen wrote an extended passage for solo anvils in his work De Materie (Matter), with text on the subject of shipbuilding. Even former Beatle Ringo Starr dabbled in anvil playing in arguably its most mainstream outing: the darkly eccentric hit Maxwell's Silver Hammer.

While a ‘concerto for anvil’ may not top the classical charts any time soon, there’s no doubt that this obscure instrument has forged something of a niche for itself. And in a time-poor age where we're constantly being told to work fitness into our daily regime, which other instruments allow their player to get a full-on workout and save on a gym membership while performing? One thing's for sure - you can't say that for the dainty flute.

Das Rheingold runs from 26 September until 28 October. Tickets are all sold out but a selection will become available at 1pm each Friday as part of Friday Rush.