Giordano's music has a cinematic sweep in his depiction of the riotous trial where his hero is unjustly sentenced to death. 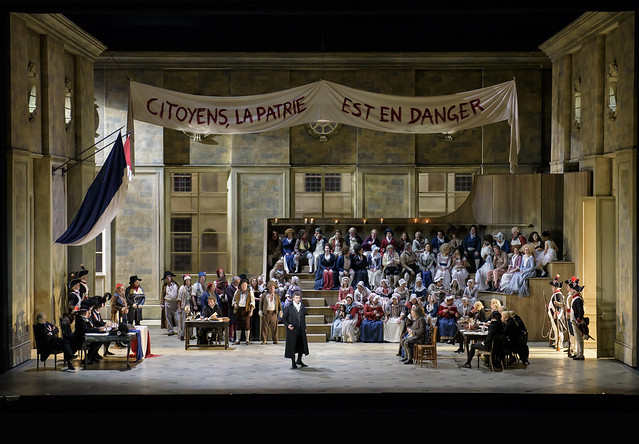 Giordano’s opera Andrea Chénier contains different ways of matching music and drama. There’s the Act I Improvviso, a famous and lyrical section in which the character of the eponymous hero is established. But Act III shows another very different use, more like a film score, in which the music responds to each twist of action to heighten its impact. Expansive melody is reserved for the lead characters, for intense emotional statements. But the sequences of short scenes that race us through the action require a different, strongly kinetic style.

Threat, violence and war provide the atmosphere for the whole opera, and the portentous chords that begin Act III conjure up a sombre mood indeed. The instructions for the stage picture include those for a large banner that proclaims ‘Citizens! Your country is in danger!’. They further describe the room for a tribunal in Paris in 1794, during The Terror of the French Revolution, where men and women will be judged. If – or more likely when – found guilty, they are sentenced to death by the guillotine.

The French Revolution, though not listed as a member of the cast, is as good as one. The politics and events of it give us the actions of the story – but it is the atmosphere drenched in suspicion and danger that heightens the central love story. Each act has some sort of central conflict between the individual and the state, and in Act III this is presented head on in a series of encounters that include Chénier's trial.

Some genuine music from the Revolution is included. In the first part of Act III, an elderly woman offers her sole surviving grandson up to fight for the Revolutionary cause. Her music is expressive against the haranguing and harshness that has come before it, where two characters drum up support for the Revolution. Then a crowd outside sings La Carmagnole, a genuine peasant dance tune that had words added in about 1792 to become a song of the Revolution. Giordano includes this melody in his score to give a precise sense of place and time and portray in sound the historical authenticity included in the opera.

Insistent music in continuous triplets underpins the curious and even bloodthirsty mob as they assemble to watch the Tribunal and chatter. But the murmurings die down as sustained low chords mark the arrival of the jury and a return to the atmosphere from the start of the act. With a sombre low melody in the orchestra, the populace comment on the arrival of the jury and finally the Public Prosecutor himself, Fouquier-Tinville. Prisoners are announced, and scorned by the public – ‘Aristocrats!’. Chenier is accused of being against the Revolution – ‘A traitor’.

The broken up, aggressive, non-melodic style turns heroic for Chénier’s defence of himself. There is no sustained melody, but declamatory statements to the accompaniment of loud chords with tremolo strings and sudden changes of register or volume that convey the weight of each of Chénier’s phrases. He proclaims his patriotism, accepts that his life can be taken, but not his honour! The response from Fouquier-Tinville is a passionless, unaccompanied intoned sentence: ‘Call the witnesses’.

The final part of the trial has Gérard attempt to save Chénier by revoking his invented accusations against the poet, but the crowd shout him down. As the sound of drums of soldiers passing by intrudes, Gérard uses it to point the contrast between the soldiers fighting for their motherland and a tribunal that kills poets. The verdict is returned, spoken, not sung: ‘Morte!’ – death. The orchestra rushes in, an immediate and dramatic contrast to the sparse and unmelodic fragments of sound of the trial, as a swift conclusion in sound – a musical exclamation mark to the act's fateful turn of events.

The production is a co-production with the National Centre for the Performing Arts, Beijing, and San Francisco Opera, and is given with generous philanthropic support from Mrs Aline Foriel-Destezet, Mrs Susan A. Olde OBE, Simon and Virginia Robertson, Spindrift Al Swaidi, Mercedes T. Bass and Mrs Trevor Swete.