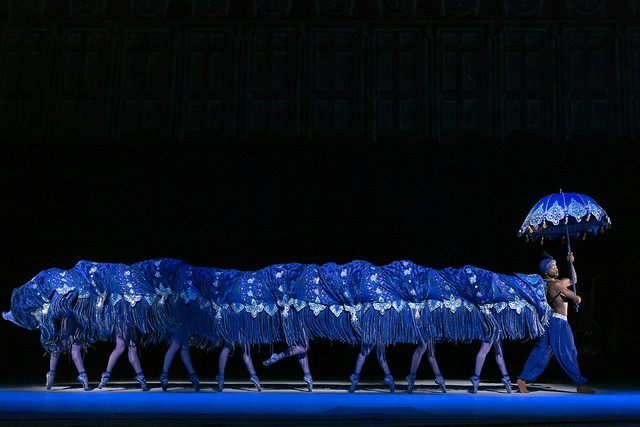 Eric Underwood as the Caterpillar in Alice's Adventures in Wonderland, The Royal Ballet © ROH / Johan Persson 2013

Christopher Wheeldon’s Alice’s Adventures in Wonderland has been described as ‘both recognizably traditional and joltingly contemporary’ – acclaimed not just for its inventive use of classical ballet, but also for the wide variety of other dance genres and cultural references it incorporates. This striking conflation of styles – combined with Joby Talbot’s shimmering score and Bob Crowley’s extraordinary designs – draws the audience into the magical Wonderland of Lewis Carroll’s novel, and brings to life the eclectic characters conjured in Carroll’s writing.

Wheeldon introduces many set pieces into the traditional 19th-century ballet framework of Alice. One of the most anticipated must be the dance for the Caterpillar. Having been enticed away from her parents’ afternoon tea party by the White Rabbit; Alice finds herself in a curious Wonderland full of magic potions and strange creatures. Desperate to find a way into an enchanted garden she has spied through a keyhole and to be reunited with the Knave of Hearts, she has asked a strange Cheshire Cat and a tap-dancing Mad Hatter for directions – but to no avail. Alone and lost, she has begun to lose hope…

Suddenly, there is a marked change in Talbot’s score – a glimmer of wind chimes and the sound of North African drums – as Alice discovers the Caterpillar, perched on a mushroom. With the stage bathed in a hazy purple light, four female dancers enter in a style that contrasts with the all the different types of dancing we’ve seen so far. While they wear pointe shoes and bourrée on in a traditionally balletic fashion, the choreography for their upper bodies is sinuous and free, with isolations – where one part of the body appears to move independently – of the shoulders, arms and wrists that are more characteristic of South Asian dance.

As they continue their exotic movements in perfect synchrony – a trait that emulates the rippling segments of a caterpillar’s body – the male Caterpillar begins to dance. Eric Underwood, who created the role, explains that when he performs the Caterpillar 'I like to think that my legs are doing ballet, my feet are doing ballet, [but] my upper body is just dancing'. While many of the steps he performs – such as developpés, pirouettes en attitude, chainés and arabesques – are recognizably from classical ballet, these are finished with an undulating torso that ripples from the base of the spine all the way to the top of the head, and isolations for the ribcage and arms.

As the dance goes on, Wheeldon’s choreography includes several eye-catching moments that evoke the personality of this mysterious Caterpillar. These range from sections of breakdancing to punchy movements led by the heel of the hand that recall Bollywood dancing, and an image reminiscent of the lotus position performed by all five dancers with legs in a wide second position and rippling wrists.

Beguiled by this fantastical creature, Alice - who has been watching in awe - joins in with the dancing. At first poséing apprehensively after the Caterpillar, she becomes more confident and – having being presented with a piece of mushroom to eat – even tries out one of his ribcage isolations. After a fleeting section of pas de deux in which Alice’s classical style and the Caterpillar’s movements are momentarily fused – and just when we think this charming creature has shown us all of his moves – he comes back on for one last trick, bedecked in finery with his segments behind him in a long line of sparkling struts.

The production is supported by Boodles and is given with generous philanthropic support from Kenneth and Susan Green, Doug and Ceri King and The Royal Opera House Endowment Fund. It is a co-production with The National Ballet of Canada.

Guess how many crystals are used on the Caterpillar’s feet in The Royal Ballet’s Alice’s Adventures in Wonderland for a chance to win a pair of Caterpillar pointe shoes worn by Leticia Stock.