Gavin Plumley dissects one of Verdi's most famous arias. 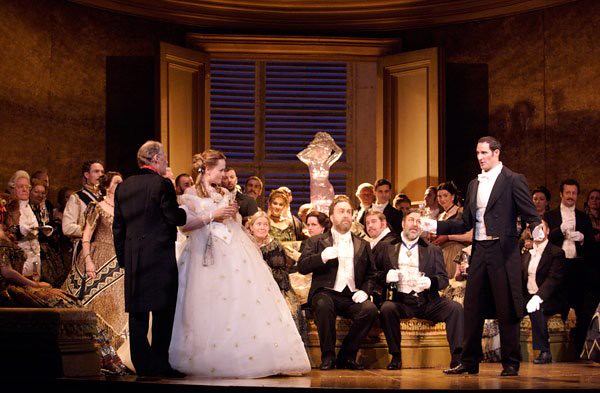 The dashing young Alfredo has declared his love, the guests have left the party and Violetta is alone. But to her, love means nothing: she’s a courtesan; she gets money by faking emotion. After a brief setback, she’s back to her party girl antics in ‘Sempre libera’, one of Verdi’s most dazzling showcases. But how long can she keep up the pretence?

Woodwind introduces her aria, the very picture of girlish glee. Its trilling tune and bouncing accompaniment stop abruptly and Violetta starts her carefree bright stream of vocal fireworks. In this clip from the opening run of the Royal Opera production in 1994, Angela Gheorghiu hits the consonants, creating bounce and bravura in the vocal line.

But however happy and energetic Violetta sounds, Verdi keeps a dark harmonic card in his back pocket. She cannot help but land on that shadowy diminished chord at the bottom of each phrase. So although the music is resolutely in a major key, Verdi mixes minor tones into the harmonic palate.

Other heart-stopping elements lurk in the background. As soon as Violetta climbs to a ringing top C, Alfredo’s amorous voice is heard in the street. It stops Violetta abruptly. Snapping out of her reverie she launches straight back into the dizzying coloratura. These vocal leaps became a prominent feature of 18th and 19th century opera and were a staple of bel canto repertoire. Often these indicated jollity or madness. Here, Verdi blurs the boundaries between the two states.

In the second part of the aria (a modified repeat of the first), Violetta won’t be deterred and she skips ever higher, even when Alfredo interrupts. Gheorghiu is particularly effortless in the way she throws away these rising phrases. This is a woman in her prime, but we know it won’t last.

If on the surface ‘Sempre libera’ is a coloratura platform for the soprano, it similarly uncovers the central conflict in Violetta’s life. Alfredo may be singing in the street, but it’s as if his voice haunts her. Domesticity calls her away from high society. And although she commits to a life of pleasure in these jovial bars, three months later (at the start of Act II) she is living with Alfredo. This aria unlocks the tragedy that awaits them both.

Violetta:
Free and aimless I frolic
From joy to joy,
Flowing along the surface
of life's path as I please.
As the day is born,
Or as the day dies,
Happily I turn to the new delights
That make my spirit soar.

Alfredo:
Love is a heartbeat throughout the universe,
mysterious, altering,
the torment and delight of my heart.

Gavin writes, lectures and broadcasts widely about music in the 19th and 20th centuries. www.entartetemusik.blogspot.com