A perennial favourite: The history of Il trovatore at the Royal Opera House

Verdi’s fiery tragedy has been a staple at the Royal Opera House for centuries, as revealed by a foray into our archives. 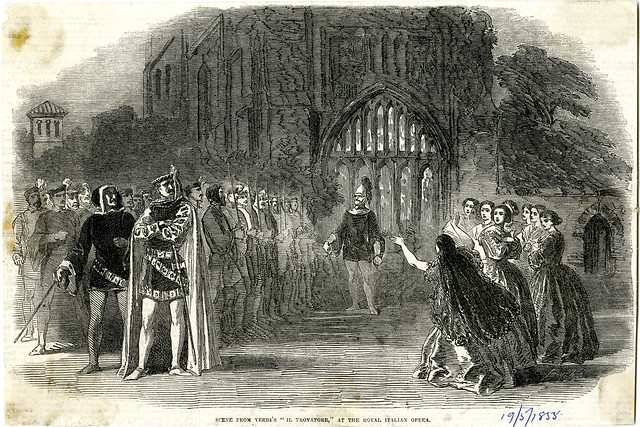 Illustration of a scene from Verdi's Il trovatore at the Royal Italian Opera, 19 May 1855, from the Illustrated London News © ROH Collections

Verdi’s Il trovatore had its London premiere on 10 May 1855, just two years after its world premiere in Rome. It took place at the Royal Italian Opera – the second theatre to stand on our Covent Garden site. Since then it has been a fixture of our repertory, right up to the present day with David Bösch’s new production for The Royal Opera.

At its premiere, Il trovatore was a much anticipated new work from the leading Italian composer of the day, following the success of earlier works such the opera’s immediate predecessor, Rigoletto. In London it formed part of the Royal Italian Opera’s 1855 season, according to Harold Rosenthal ‘artistically one of the most interesting since Covent Garden became the Royal Italian Opera’. It was one of only two new operas to be performed in London that season, with Meyerbeer’s L’Etoile du nord. That season also had the dubious distinction of being the last before the second theatre burned down – perhaps a fitting sequel to Il trovatore’s fiery subject matter.

Illustration of a scene from Verdi's Il trovatore at the Royal Italian Opera, 19 May 1855, from the Illustrated London News © ROH Collections

Detail from playbill for the UK premiere of Il trovatore at the Royal Italian Opera, Covent Garden on 10 May 1855 © Royal Opera House

The first-night London cast included Jenny Ney as Leonora, Pauline Viardot as Azucena, Enrico Tamberlik as Manrico, Francesco Graziani as Di Luna and with Michael Costa conducting. The conducting and the artistry of the singing and acting all won high praise, with critics stating that the opera ‘has, probably, never been better performed than by the Company of the Royal Italian Opera’, and the scenery and costumes were described as ‘exquisitely beautiful’.

London audiences seem to have been both pleased and perturbed by Verdi’s new work. For the first time critics had no misgivings about Verdi’s music. Rosenthal writes that ‘Di Luna’s aria “Il balen” was heard everywhere… whistled by errand boys and sung in drawing rooms’. The Illustrated London News described the story as ‘revoltingly horrible’, but went on to say that Il trovatore ‘may be regarded as the best work [Verdi] has yet produced’ and that it was ‘strongly interesting… and when well performed, never fails to make a deep impression’. Frederick Gye, the Royal Italian Opera’s manager, wrote in his diary, ‘This is the first night of the Trovatore, and it had a great success’. It continued to be a great success for the remainder of the season, ‘repeated to immense houses and with unabated applause’.

Since that London premiere, Il trovatore has been performed on the main stage at Covent Garden 326 times, with 171 of these performances by The Royal Opera in four different productions since 1946. The premiere was sung in Italian but there have been numerous performances sung in English – and for one revival by the Covent Garden Opera Company in 1951/52 it was sung in both, with Gré Brouwenstijn as Leonora singing in Italian and the rest of the cast in English.

At the 1855 London premiere, the Illustrated London News proclaimed that ‘it is evident that the Trovatore will be a permanent addition to the repertoire of the theatre’ – and so it has proved to be the case.

The production is a co-production with Frankfurt Opera and is staged with generous philanthropic support from the Royal Opera House Endowment Fund.