A happy marriage despite a fiery courtship: Cavalleria rusticana and Pagliacci

Fierce competition may have fuelled the composition of these two operas, but together they now make one of opera’s most popular couplings. 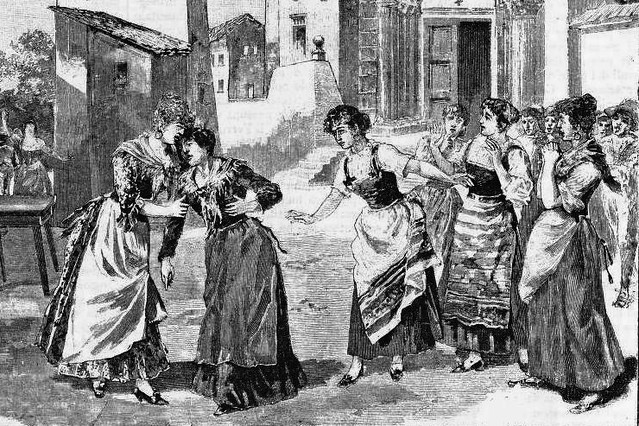 Three of the most famous members of the giovane scuola (young school) of Italian opera composers – Ruggero Leoncavallo, Giacomo Puccini and Pietro Mascagni – were born into an artistic world dominated by Giuseppe Verdi. It was a world that to Italian nationalists' minds had been infiltrated by foreigners such as Richard Wagner. Despite this incipient globalization, the Italian operatic world was a very small one, in which traditions were challenged and composers toiled to survive. Impresarios and, above all, publishers operated the strings of what can be viewed from above as a complex and often cut-throat puppet show.

Three music publishers dominated the opera scene in 19th-century Italy: Giovanni Ricordi, Francesco Lucca and, a little later, Edoardo Sonzogno. Music publishing was big business, and exerted influence on composition, performance and dissemination. Huge amounts of money were to be earned through performances, sales of piano-vocal scores and the hosts of offspring generated from a work’s most famous melodies.

The publishing house of Sonzogno was founded in the late 18th century, but it wasn’t until 1874 that Edoardo Sonzogno created its musical wing, the Casa Musicale Sonzogno. Sonzogno was interested in younger composers, and he encouraged them by sponsoring a series of four competitions for new one-act operas. In the second competition, the first prize was awarded to Mascagni’s Cavalleria rusticana.

Mascagni saw Giovanni Verga’s play Cavalleria rusticana in Milan, and subsequently learned about the Sonzogno competition. As he wrote around fifty years later, he consulted with Verga, who gave him permission to use the work. He then spoke to his friend Puccini, who urged him to compose the opera. Romanticized tales of the opera having been composed in a flash of inspiration began to circulate soon after its smashing debut, but Mascagni later asserted that Cavalleria rusticana was not ‘jotted down, like a flicker of lightning, written in a hurry, gushing forth in me like a gift from Heaven’. Rather, he bemoaned, ‘Cavalleria cost me much labour’.

Cavalleria rusticana had its premiere on 17 May 1890 at the Teatro Costanzi in Rome and was lauded by the press. It was the catalyst for Leoncavallo, who had so far had little success as a composer but had managed to have a lengthy legal dispute with Ricordi. He submitted his Pagliacci to Ricordi’s rival, Sonzogno, who immediately set about bringing it to the stage. The opera was given its premiere on 21 May 1892 in Milan at the Teatro dal Verme and was a huge success – but one that would bring Leoncavallo into yet another controversy, as he faced a charge of plagiarism from the French playwright Catulle Mendès.

Pagliacci and Cavalleria rusticana were first performed together on 2 April 1893 at the Politeama Rossetti theatre in Trieste. The leading male roles in each opera were sung by two different tenors: Edoardo Castellano as Canio and Vincenzo Coppola as Turiddu. More than half a century would pass before a single tenor would sing both roles in the same evening; that hearty soul was Beniamino Gigli, who sang them in Barcelona, Bilbao and Madrid, during his 1946 tour of Spain.

Both Pagliacci and Cavalleria rusticana have been matched less successfully with other operas for over a century. Cavalleria rusticana has been a companion piece to more than fifty operas or parts of operas, including Verdi’s Aida, Menotti’s Amelia al ballo, Richard Strauss’s Salome and Falla’s La vida breve, and numerous ballets, including Tchaikovsky’s Swan Lake, Ravel’s La Valse and Stravinsky’s Petrushka. Pagliacci has been teamed up with operas including Gluck’s Orfeo, Bizet’s Djamileh and Puccini’s Il tabarro. Such couplings now seem odd in the face of ongoing popular reception of this operatic pas de deux, strange fellows intruding on an otherwise quite happy marriage.

This is an edited extract from Helen B. Greenwald’s article ‘Coupling: Mascagni and Leoncavallo’ in The Royal Opera’s programme book, available during performances and from the ROH Shop.

The production is a co-production with Opera Australia, La Monnaie, Brussels, and The Göteborg Opera, and is given with generous philanthropic support from the Royal Opera House Endowment Fund.