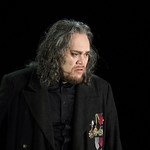 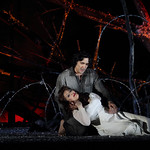 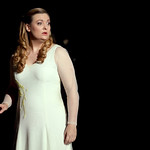 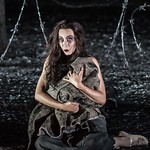 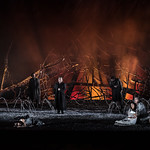 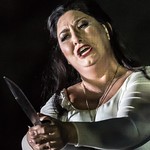 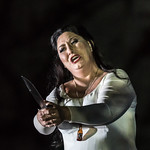 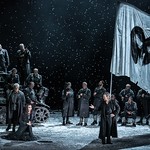 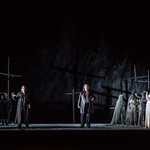 Gregory Kunde as Manrico and Anna Pirozzi as Leonora in Il trovatore, The Royal Opera © 2016 ROH. Photograph by Clive Barda 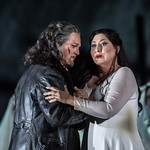 There are currently no scheduled performances of Il trovatore. It was last on stage 1 December 2016—9 February 2017 as part of the Winter 2016/17 season.

The Count di Luna loves Leonora, but she loves Manrico, the Count’s military enemy. Manrico’s mother Azucena tells him how her mother was burnt to death for supposed witchcraft against the Count’s baby brother. Azucena intended to throw the baby onto the fire – but blinded by revenge she lost her own child to the flames.

Verdi wrote Il trovatore hot on the heels of Rigoletto, and its premiere came a scant two months before that of La traviata. But Il trovatore, while no less popular than its neighbours, is quite different. Verdi himself had suggested the source material, Antonio García Gutiérrez’s play El trovador (1836), to his librettist Salvatore Cammarano. He encouraged Cammarano to pursue the same cross-genre developments Verdi had introduced in Rigoletto, writing in an early letter ‘if the entire opera were, let’s say, a single piece, I would find it more reasonable and just’. As it happens, the end result is highly formal in structure, and seems to look back before the innovations of Rigoletto – but audiences since the opera’s premiere have been captivated by its great dramatic concision and energy.

Il trovatore is probably best known for its ‘gypsy’ music – the Anvil Chorus, Azucena’s ‘Stride la vampa’ and Manrico’s heroic ‘Di quella pira’ are key examples. But Verdi wrote wonderful music for all four of his leads, with the ‘aristocratic’ ‘Il balen del suo sorriso’ for the Count, and Leonora’s prayer ‘D’amor sull’ali rosee’ among a host of thrilling ensembles and chorus numbers. German director David Bösch, celebrated for his theatrical productions for Munich and Frankfurt among others, makes his UK debut with this new production for The Royal Opera. The opera’s themes of jealousy, revenge and love play out against a hauntingly beautiful, wintry landscape that has been riven by war.

The performance lasts about 2 hours 50 minutes, including one interval.

Sung in Italian with English surtitles.