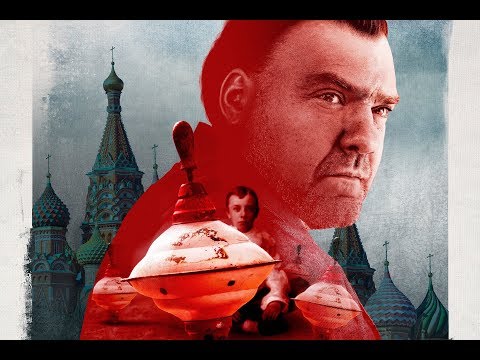 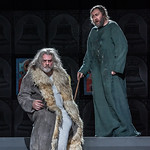 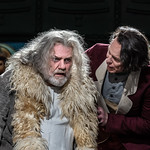 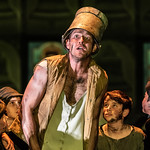 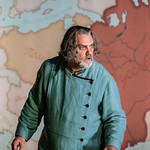 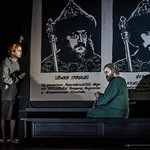 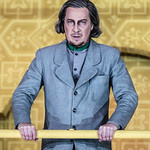 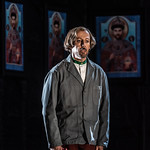 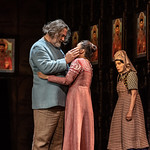 David Butt Philip as Grigory Optrepiev and Anne Marie Gibbons as Hostess of the Inn in Boris Godunov, The Royal Opera © 2019 ROH. Photograph by Clive Barda 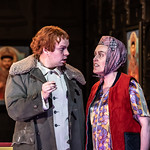 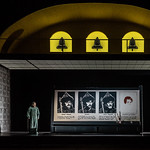 There are currently no scheduled performances of Boris Godunov. It was last on stage 19 June—3 July 2019 as part of the Summer 2018/19 season.

After the deaths of Ivan the Terrible and his son Fyodor, Boris Godunov becomes Regent, as Ivan's surviving son Dmitry, the Tsarevitch, is still a child. When Dmitry dies in mysterious circumstances, politicians urge Boris to become Tsar. Boris reluctantly agrees, hoping that no one will discover the secret that troubles him. During the years that follow, Boris proves himself a good ruler.

However, a serious famine provokes Boris's enemies, led by Prince Shuisky, to attempt to undermine his authority. Meanwhile the young monk Grigory, who bears a remarkable resemblance to the deceased Tsarevitch, decides to impersonate Dmitry and seize the throne. With pressure mounting on him from all sides, Boris begins to lose his sanity.

Boris Godunov is one of the most dramatically rewarding bass-baritone roles: a noble ruler who loves his children and his people, but whose thirst for power has led him to commit a terrible crime. Musorgsky traces the Tsar's downfall with psychological acuity, from the nobility of his Coronation to his tragic end in one of opera's most affecting death scenes. Other highlights include the stirring chorus that opens and closes the Coronation Scene (based on a Russian folksong), Pimen's austere monologue in Scene 7 and the comic interlude with the monks Varlaam and Missail in Scene 4. Richard Jones's insightful production reflects the conflict between Boris's public persona and his private guilt through a set in which the murder of the Tsarevitch Dmitry is ritually re-enacted in a high vaulted room.

Musorgsky was inspired to compose Boris Godunov after reading Pushkin's Shakespeare-inspired play of the same name. He completed his first version of the opera in 1869, but it was rejected by the Imperial Theatres Directorate due to its lack of lyricism and significant female characters. Musorgsky's revised 1872 version - which contained more formal arias, several additional characters and a new act - received its premiere in 1874 at the Mariinsky Theatre, St Petersburg. The Royal Opera performs the composer's original version, which has a predominantly naturalistic and declamatory vocal style, and in which the story remains focused on Boris throughout.

This production contains scenes of violence which would not be suitable for children under the age of 12. Audience discretion is advised

The performance lasts about 2 hours 10 minutes; there is no interval

Ticket holders are advised to arrive in good time before the start, as latecomers cannot be admitted

Sung in Russian with English surtitles

We have eight Boris Godunov‐related products in the shop