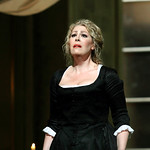 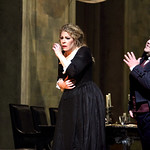 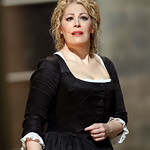 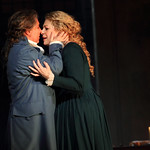 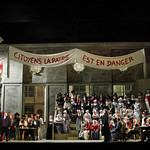 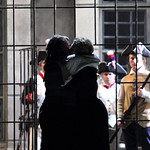 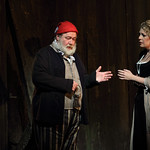 Carlo Bosi as The Incredibile and Dimitri Platanias as Carlo Gérard in Andrea Chénier, The Royal Opera © 2019 ROH. Photograph by Catherine Ashmore 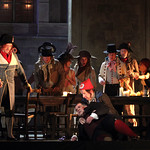 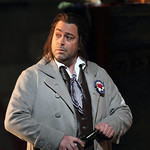 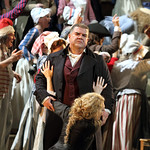 There are currently no scheduled performances of Andrea Chénier. It was last on stage 20 May—9 June 2019 as part of the Spring 2018/19 season.

The poet Andrea Chénier attends a party at the Countess di Coigny's mansion. He expresses outrage at the corruption in King Louis XVI's government and the poverty of many Frenchmen. This moves the Countess's daughter Maddalena, and inspires the footman and revolutionary-in-the-making Carlo Gérard to quit his servitude. Soon after, the French Revolution begins.

Five years on, Louis XVI has been executed, the Jacobin party are in power, and their leader Robespierre has imposed 'The Terror'. Gérard has become a leading Jacobin, but Chénier has fallen out of favour with the authorities and is in danger. He delays his flight from Paris to meet a mysterious woman who has written to him. She reveals herself to be Maddalena, and the pair quickly realize they are in love. However, Gérard also desires Maddalena. When Chénier is arrested by the authorities, Gérard realizes that he has the power to destroy the man who once inspired him. As his conscience is tested, so too is the love of Andrea and Maddalena.

Andrea Chénier was Giordano's third opera. The libretto, by Puccini's regular collaborator Luigi Illica, is loosely based on the life and tragic death of the French poet André Chénier, who was executed during the French Revolution. The premiere of Chénier on 28 March 1896 was a great success, and the opera became one of the most popular examples of the verismo (literally, 'realist') movement in Italian opera.

Giordano perfectly captures the atmosphere of Paris pre- and post-Revolution, through music including an elegant Gavotte (Act I) and the popular revolutionary songs 'La Carmagnole' and the 'Marseillaise'. Not surprisingly, the tenor protagonist gets some fine solos, including Act I's ardent aria 'Un dì, all'azzurro spazio', and Act IV's nostalgic 'Come un bel dì di maggio'. But Maddalena and Gérard also have wonderful arias: the former's impassioned 'La mamma morta', and the latter's tormented 'Nemico della patria?' as he wrestles with his conscience in Act III. David McVicar's spectacular, almost cinematic production evokes the profound social changes in late 18th-century Paris, with beautiful, historically-informed sets and costumes by Robert Jones and Jenny Tiramani.

the Patrons of Covent Garden

The performance lasts about 2 hours 35 minutes, including one interval

Please remain seated during the pauses.

We have eight Andrea Chénier‐related products in the shop