Benini’s recordings include Rossini’s Aureliano in Palmira and Mercadante’s Virginia for Opera Rara. He has also made several recordings for Deutsche Grammophon, including La Cenerentola. He was named best conductor of the season by the Spanish press following his performances of Adriana Lecouvreur for the Liceu, Barcelona, in 2012. 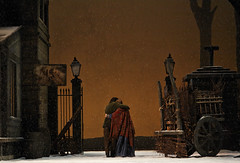 Canadian conducts in place of Italian Maestro due to inflamed shoulder.