American choreographer Leah Hausman made her Royal Opera debut in 2001 on Rigoletto, directed by David McVicar, and has since returned to work on Die Zauberflöte, Le nozze di Figaro, Aida and Les Troyens, directed by McVicar; Elektra, directed by Charles Edwards; and Il turco in Italia, directed by Moshe Leiser and Patrice Caurier. She regularly directs revivals for The Royal Opera. In the 2019/20 Season she is Associate Director for Death in Venice.

Also active in theatre, Hausman has worked for companies including the Royal Shakespeare Company, Complicite, National Theatre, Old Vic and Chichester Festival, among others. She has co-directed several plays with Neil Bartlett for the Royal Court and elsewhere. 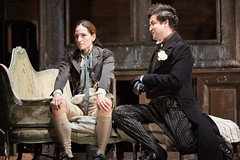