Kura was born in Hokkaido and began dancing at the age of eight. In 1995, aged 16, he joined The Royal Ballet Upper School on a Prix de Lausanne scholarship, and graduated into the Company. His repertory with the Company included Bronze Idol and Magdaveya (La Bayadère), Tirrenio (Ondine), Bluebird and Florestan (The Sleeping Beauty), Benvolio and Mercutio (Romeo and Juliet), Dancing Gentleman (Manon), Hungarian Officer (Mayerling), Spirit of Fire (Homage to The Queen), Demetrius (The Dream) and roles in ‘Diamonds’ and ‘Rubies’ (Jewels), Symphony in C, Requiem and Theme and Variations.

Kura has created several roles for the Company and in 2014 created a role in Mayuri Boonham’s The Human Edge in the Linbury Studio Theatre. While a dancer with the Company he participated in projects with Chance to Dance and the Royal Opera House’s Learning and Participation department. Choreographic work includes DW2 for The Royal Ballet’s Draft Works 2014.

Why is dance so important for young people? 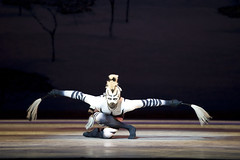 Ahead of this weekend’s Chance to Dance performance, we asked a participant, teacher and a Royal Ballet Soloist why experiencing dance at a young age is so valuable. 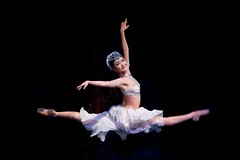 Mayara Magri and Kenta Kura in The Nutcracker, The Royal Ballet

Kenta Kura in the pas de trios in Swan Lake, Act I

Kenta Kura as The Frog, Christopher Saunders as The Duchess and Ludovic Ondiviela as The Fish in Alice's Adventures in Wonderland, The Royal Ballet