Jun was born in Gwangju and began studying ballet aged three. He trained at Sunhwa Arts School and The Royal Ballet Upper School. He was a finalist at the 2014 Prix de Lausanne and in 2016 won the grand prix at Youth America Grand Prix and the School’s Gailene Stock Award. Roles while at the School included performances in Les Rendezvous, La Bayadère, Les Patineurs, Concerto and the Swan Lake pas de quatre.

Professional engagements while a student have included dancing with The Royal Ballet in The Sleeping Beauty and Anastasia. His repertory with the Company includes Benno (Swan Lake), Mandolin Dancer (Romeo and Juliet), Russian Dance, Chinese Dance and Spanish Dance (The Nutcracker), pas de six (Giselle) and roles in Flight Pattern and Like Water for Chocolate. 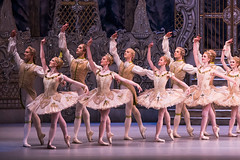