French tenor Jean-Paul Fouchécourt made his debut with the Company in 1997, singing the title role in Platée in a performance at the Barbican with the Mark Morris Dance Group. He has since sung Astrologer (The Golden Cockerel), the four servants (Les Contes d’Hoffmann), Le Remendado (Carmen), Don Basilio (Le nozze di Figaro) and Monsieur Triquet (Eugene Onegin) for The Royal Opera. In the 2018/19 Season he returns to sing Don Basilio.

Fouchécourt was born in Blanzy and worked as a conductor and saxophonist before retraining as a singer. He began his career with Les Arts Florissants and William Christie in 1986 and has since established a career as one of the leading interpreters of French Baroque repertory. He works with ensembles and companies including Les Musiciens du Louvre, the Metropolitan Opera, New York, Paris Opéra, Opéra de Lyon, at the Edinburgh, Salzburg and Saito Kinen festivals and with the BBC Symphony Orchestra, Berlin Philharmonic, Orchestre National de France and at the BBC Proms. His operatic repertory also includes Bardolfo (Falstaff), Teapot/Arithmetic and Frog (L’Enfant et les sortilèges) and Torquemada (L’Heure espagnole), Arnalta (L’incoronazione di Poppea), Le Roi Ouf I (L’Etoile), Frick/Prosper (La Vie parisienne) and Husband (Les Mamelles de Tirésias). 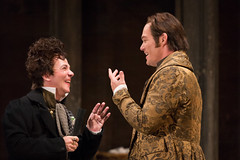 Kangmin Justin Kim as Cherubino and Jean-Paul Fouchécourt as Don Basilio in The Marriage of Figaro, The Royal Opera