British conductor Ivor Bolton made his Royal Opera debut in 1995 conducting the world premiere of Goehr’s Arianna. He has since conducted Giulio Cesare (in concert at the Barbican), Don Giovanni, Iphigénie en Tauride, La Calisto, Tamerlano and Le nozze di Figaro for The Royal Opera. Bolton is currently Music Director of Teatro Real, Madrid, and of Basel Symphony Orchestra, and Chief Conductor of the Dresden Festival Orchestra. In 2018/19 he conducts Billy Budd for The Royal Opera.

Bolton was Chief Conductor (2004–16) and is now Conductour Laureate of the Mozarteum Orchestra, Salzburg. He has also worked with such orchestras as the Vienna Symphony Orchestra, Orchestra Sinfonica di Milano Giuseppe Verdi, Tonhalle-Orchestra Zürich, the Royal Concertgebouw Orchestra, Orchestre de Paris, Freiburg Baroque Orchestra and Rotterdam Philharmonic Orchestra. His awards include the Bayerische Theaterpreis for his work in Munich. 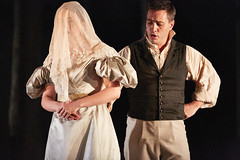