Argentine dancer Herman Cornejo is a principal of American Ballet Theatre. He made his Royal Opera House debut in 2015 as the title role in Martha Clarke’s Chéri, opposite Alessandra Ferri. 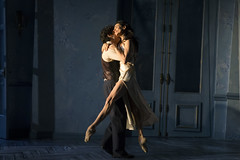 Our quick introduction to Martha Clarke’s impassioned piece of dance theatre, inspired by the writings of Colette.