German conductor Hartmut Haenchen made his Royal Opera debut in 1991 conducting Gluck's Orfeo ed Euridice. He has since returned to conduct Mitridate, re di Ponto, Le nozze di Figaro, Salome and Tannhäuser with the Company. In the 2019/20 Season he conducts Don Giovanni.

Listen: Wagner’s Tannhäuser – ‘It’s an amazing discovery to feel that way about music’ 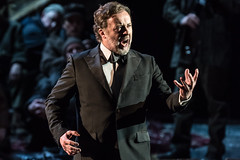