George Balanchine (1904–83) was one of the leading dance figures of the 20th century. He created a new style of ballet with his company New York City Ballet and reinvigorated the US ballet scene. His innate musicality is evident in all his works, and led to a rich partnership with composer Igor Stravinsky. Of his estimated 425 works many are in the core repertories of companies around the world.

Balanchine was born Balanchivadze in St Petersburg. He trained at the Imperial State Ballet and from the age of 11 danced on the stage of the Mariinsky Theatre, entering the company in 1921. Three years later he auditioned for Sergey Diaghilev in Paris and spent five years as ballet master with the Ballets Russes. After Diaghilev’s death he worked as a choreographer and ballet master around Europe before being invited by impresario Lincoln Kirstein to move to the USA in 1933. Balanchine began creating a new school and repertory of American ballet and in 1948 founded NYCB. Balanchine’s style of dance favoured tall ballerinas, and his muses included Maria Tallchief, Tanaquil Le Clercq and Suzanne Farrell. He remained hugely prolific throughout his life, creating his last work four months before his death of Creutzfeldt-Jakob disease.

Balanchine’s style, a fresh and uniquely musical interpretation of classical ballet, is one of the most distinctive and influential languages in ballet, and has led to the choreographer being widely acknowledged as the father of American ballet. 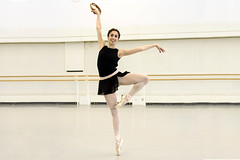 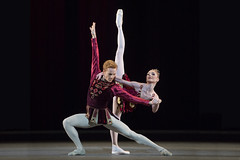 Rupert Pennefather and Marianela Nunez in Symphony in C

Roberta Marquez and Johan Kobborg in Symphony In C

The Royal Ballet's Symphony in C