English teacher, répétiteur, notator and designer Gary Harris was a notator and répétiteur with The Royal Ballet 1991–6, during which time he worked with such choreographers as William Forsythe and Kenneth MacMillan, and staged works by Frederick Ashton. He has since returned numerous times to stage works by MacMillan. In the 2017/18 Season he creates new designs for Scottish Ballet’s production of Le Baiser de la fée, performed at the Royal Opera House as part of The Royal Ballet’s festival Kenneth MacMillan: a National Celebration.

Harris was born in London and trained at The Royal Ballet School before joining London Festival Ballet (now English National Ballet). He has worked internationally as a dancer, including in On Your Toes, La Cage aux folles and Phantom of the Opera (West End). He was Associate Artistic Director of Hong Kong Ballet and Artistic Director of Royal New Zealand Ballet, 2001–10, where he staged Swan Lake, Paquita, Coppélia and Giselle and mounted new productions of The Nutcracker and Don Quixote.

MacMillan's The Invitation: How dancers revive a challenging historic ballet 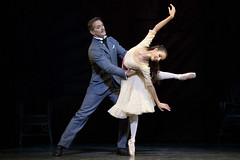 For its first revival in decades, landmark dramatic ballet The Invitation is being performed in a very different cultural climate from its 1960 premiere.