French composer Erik Satie (1866–1925) anticipated many of the innovations of 20th-century music, including minimalism. His works embrace a wide variety of styles and are often highly ironic. His greatest works include the ballets Parade, Mercure and Relâche and the symphonic drama Socrate. Many of his most famous instrumental works, including the Trois Gymnopédies in an orchestration by his friend Debussy, have been adapted for dance.

Satie was born Eric Satie in Hornfleur and began to study music in 1874. In 1879 he enrolled at the Paris Conservatoire, where in 1881 he was described by his teacher as the ‘laziest student in the Conservatoire’. In 1887 he deliberately contracted bronchitis in order to evade compulsory military service, and that year moved to Montmartre. Here he quickly became a part of the café-concert culture, first at the Chat noir and then at the Auberge du clou, working as a pianist and conductor. He won some notoriety with such scandalous works as the ‘Christian ballet’ Uspud. In 1898 he moved to the distant suburb Arcueil, where he remained for the rest of his life, walking the 10km into Paris and back every day and composing in cafés along the way. He continued to work at café-concerts and in 1903 published the song cycle Trois Morceaux en forme de poire, adapted from some of his cabaret songs. In 1905 he enrolled at the Schola Cantorum to improve his technique, studying composition and counterpoint. In 1911 Ravel performed some early Satie pieces at the Société Musicale Indépendante, propelling Satie into the public eye as a forerunner of Impressionism. Satie was then able to stop work at the café-concerts and in 1914 published his Sports et divertissements. During World War I he became involved with Sergei Diaghilev and the Ballets Russes, which led to Parade (1917) and a number of other works for the stage. In 1924 he wrote the first synchronized film score in Entr’acte with René Clair.

Satie was a composer of remarkable independence and individuality, whose ideas inspired not only his contemporaries, including Debussy, Ravel, the composers of Les Six and members of the Dada movement, but also such composers as John Cage. 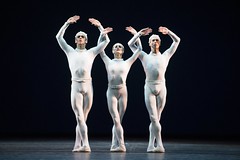 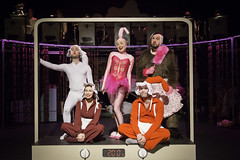