Forster studied at King’s College, Cambridge, where he was a member of the discussion group the Apostles, many of whose members later participated in the Bloomsbury Group. He graduated in 1901 and subsequently travelled in Europe. He wrote most of his novels between 1905 and 1914: these include Where Angels Fear to Tread (1905), A Room with a View (1908) and Howard’s End (1910). In the early 1920s he spent time in India as the private secretary to the Maharajah of Dewas. His Indian stay inspired his most successful, and final, novel, A Passage to India (1924). A volume of his collected short stories was published in 1947. In his later years Forster concentrated primarily on non-fiction, including biographies of Goldsworthy Lowes Dickinson and Marianne Thornton, The Hill of Devi (a documentary account of his time in India, published in 1953) and the collection of political essays Two Cheers for Democracy (1951). He became an honorary fellow of King’s College, Cambridge, in 1946, and lived for much of the last part of his life in the college.

While Forster and Britten were friends, the genesis of Billy Budd was sometimes troubled, and at one stage Forster’s co-librettist Eric Crozier had to mediate between the composer and Forster. Although Britten and Forster re-established good relations before the opera’s premiere, Forster never wrote another libretto.

The Shipping Cues: Why ships on stage make great drama 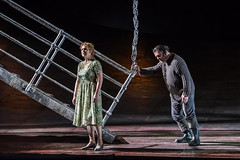 Building a ship on stage might be a stage designer’s nightmare, but life on or by the sea has made ideal material for some of opera’s greatest stories.