David Nixon has been Artistic Director of Northern Ballet since 2001. His many award-winning and award-nominated ballets for Northern Ballet include The Three Musketeers, Madame Butterfly, A Midsummer Night’s Dream and The Great Gatsby.

Nixon trained as a dancer in his home town of Chatham, Ontario, at the National Ballet School of Canada, where he first became interested in choreography, in Europe and with Erik Bruhn and Eugene Valukin. He began his dance career at the National Ballet of Canada, becoming a principal dancer. In 1985 he joined the Deutsche Oper Ballet in Berlin as a principal dancer, going on to win the 1987 Critics’ Award for Best Male Performance and increasingly to choreograph. He left Berlin to dance as a guest artist with companies including National Ballet of Canada, Bavarian State Ballet, Royal Winnipeg Ballet, Birmingham Royal Ballet, Komische Oper Berlin, Berlin State Ballet, Hamburg Ballet and Sydney City Ballet. In 1994 he returned to Deutsche Oper Ballet as First Ballet Master. He was Artistic Director of BalletMet in Columbus, Ohio, 1994–2001, before joining Northern Ballet.

Nixon was voted Director of the Year by readers of Dance Europe in 2003 and 2006. Northern Ballet received the audience award at the Critics’ Circle National Dance Awards in 2004, 2005 and 2006 and the Patron’s Award in 2009, the 2014 Taglioni European Ballet Award for Best Company and the 2016 Dance Award in the South Bank Sky Arts Awards. Nixon was made an OBE in 2010. 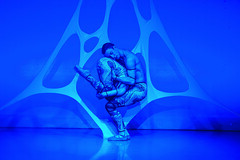 The Artistic Director on growing his Leeds-based company and working with new choreographic talent.