Russian photographer Andrej Uspenski is a former First Artist of The Royal Ballet. He joined the Company in 2002, promoted to First Artist in 2004, and retired as a dancer in 2015. Uspenski regularly photographs rehearsals and performances for the Company. He has published the photography books Dancers: Behind the Scenes with The Royal Ballet (2013), Natalia Osipova: Becoming a Swan (2013) and Steven McRae: Dancer in the Fast Lane (2014) and his work has been exhibited at venues including the Old Truman Brewery.

Uspenski was born in St Petersburg and trained at the Vaganova Ballet Academy, the Palucca School, Dresden, and the Berlin State Ballet School. In 1998 he won second prize at the Rieti International Ballet Competition, and the following year won second prize at the Yalta International Ballet Competition. He graduated into Royal Danish Ballet in 1999, joining The Royal Ballet in 2002. 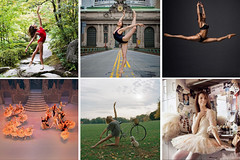 Get backstage with the world’s best dancers and companies by following them on the photo sharing app.

Exhibition of photographs of dancers now open at the ROH

Images from Andrej Uspenski's book 'Dancers: Behind the Scenes with The Royal Ballet' are now on display in our Amphitheatre Restaurant.