Alison Chitty made her Royal Opera debut in 1991, creating designs for Gawain, directed by Di Trevis. She has since created designs for Billy Budd, Arianna and The Bartered Bride, all directed by Francesca Zambello, The Minotaur and Parsifal, directed by Stephen Langridge, Nabucco, directed by Daniele Abbado, and a double programme of Birtwistle’s The Corridor and The Cure, directed by Martin Duncan.

Chitty has worked for more than forty years as a designer. She studied at Central Saint Martins College of Arts and Design and was resident designer at the Victoria Theatre, Stoke-on-Trent, 1970–79. She has regularly collaborated with Peter Hall, their credits including Antony and Cleopatra and The Bacchae, and with Mike Leigh, working as production designer on his films Life is Sweet, Naked and Secrets and Lies (winner of the Palme d’Or). She has worked extensively for the Royal Shakespeare Company, for English National Opera, Opera North and Santa Fe Opera, and for the National Theatre, where she was resident designer for eight years and was appointed an associate in 2003. In 2010 the National Theatre hosted a retrospective exhibition of her works.

Chitty has been Director of the Motley Theatre Design Course since 2000 and was awarded an honorary doctorate from the University of Staffordshire in 2005. She has won two costume design Olivier awards, for Remembrance of Things Past (2001) and for The Voysey Inheritance (2007). She received an OBE in 2004.

Parsifal available to buy on DVD 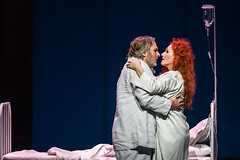 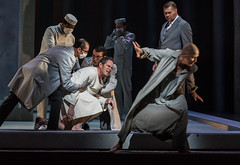 A masterclass from legendary Wagnerian John Tomlinson, a musical introduction from Antonio Pappano, and the creative team on their production. 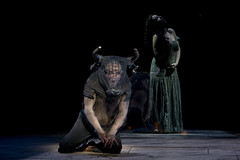 As the mythical Minotaur returns to the main stage, an introduction to Harrison Birtwistle's acclaimed opera.