German academic Alexander Meier-Dörzenbach made his Royal Opera debut in 2013 as dramaturg for Les Vêpres siciliennes, directed by Stefan Herheim. He returns as dramaturg for Herheim’s production of The Queen of Spades in the 2018/19 Season.

Meier-Dörzenbach was born in Hamburg in 1971 and studied American and German literature, art history and education at the University of Hamburg, where he also took his doctorate in an interdisciplinary study of Gertrude Stein, Sherwood Anderson and modern art. He was assistant professor of American Studies there 2008–12. As a dramaturg he works regularly with Herheim, including on his productions of Parsifal (Bayreuth Festival), Tannhäuser and La bohème (Norwegian National Opera), La forza del destino and Lohengrin (Berlin State Opera), Barbe-bleue and Serse (Komische Oper Berlin), Pelléas et Mélisande (Glyndebourne Festival), Lulu (Copenhagen, Oslo and Dresden), Eugene Onegin and The Queen of Spades (Dutch National Opera), Le nozze di Figaro (Hamburg State Opera), Wozzeck (Deutsche Oper am Rhein) as well as Salome and Die Meistersinger von Nürnberg (Salzburg Festival). He also often collaborates as a dramaturg with director Karoline Gruber, on her productions of Ariadne auf Naxos (Leipzig), Elegie für junge Liebende (Essen) and The Gambler (Vienna), among others.

Meier-Dörzenbach has taught dramaturgy at the Hamburg Hochschule für Angewandte Wissenschaften. He was chief dramaturg at the Aalto Theatre, Essen 2013–15, and now works freelance as a dramaturg and cultural lecturer. 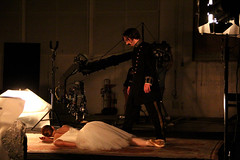 Stefan Herheim’s new production of Verdi’s grand opera has its premiere on 17 October.