Your reaction: The Bolshoi's La Bayadère

Audience tweets from all three performances of La Bayadère, during the company's summer 2013 season at the Royal Opera House. 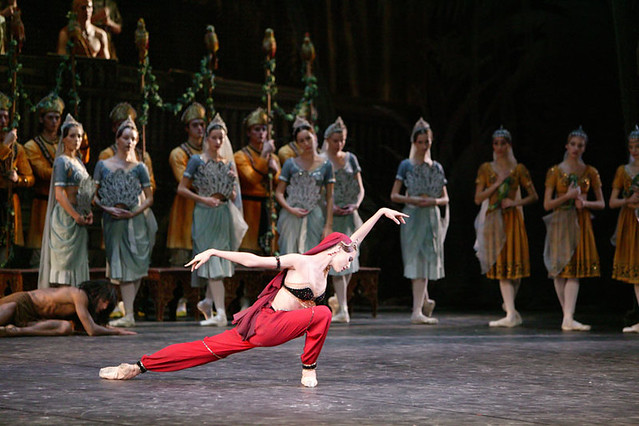 Dear #Bolshoi, you stole my heart with La Bayadere! Please return in time for Swan Lake on 14th @RoyalOperaHouse

@RoyalOperaHouse another rechoreographed disaster. Have the Bolshoi forgotten how to act as well as dance.

Back @RoyalOperaHouse Bayadere with Olga Smirnova! There is a trumpeter playing Diamonds' tune beneath my seat, it sounds like a tribute...

So lovely to watch the shades scene WITHOUT that flipping front gauze @RoyalOperaHouse this evening.

@RoyalOperaHouse #bolshoi #bayadere Anyone else notice the bit from Luigini's Ballet Egyptien in Act 1? My ears did a double-take!

Soon to be the talk of the town: Olga Smirnova after her stunning @RoyalOperaHouse debut in 'La Bayadere' pic.twitter.com/bRdAd9aG5v

They ruined my fav bit, the Golden Idol, with the #BlackedUpBoys. The girls, I notice, are allowed to remain au naturelle. #Bolshoi

Bolshoi #Bayadere - some nice moments from Obraztsova's Nikiya, particularly during death solo but she's still v much building her portrayal

Extraordinary performance of #Bayadère - the #Bolshoi danced like they were born to take to the stage and Covent Garden loved it!

Did you see the Bolshoi perform La Bayadère? Add your comments below.

The Bolshoi Ballet perform Swan Lake, The Sleeping Beauty, Jewels and The Flames of Paris until 17 August. Performances are sold out except for returns and there are no day tickets for Bolshoi productions.