Inspired by Turandot - completed by another composer after Puccini's death - we asked which opera endings you'd re-write. 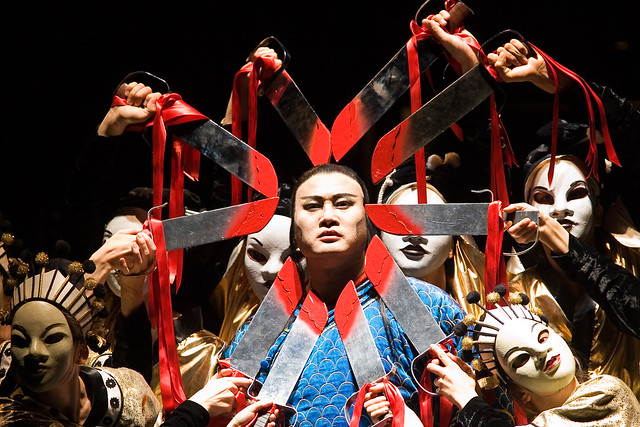 Giacomo Puccini's Turandot was the composer's final opera - he died in 1924 before it could be completed. The opera eventually had its premiere in 1926, one year and five months after Puccini's death, completed by Franco Alfano. Halfway through the third act the orchestra rested and conductor Arturo Toscanini turned to the audience announcing, 'Here the opera ends, because at this point the maestro died', before the performance segued into Alfano's ending.

Prior to the return to Covent Garden of Andrei Serban's Royal Opera production we asked our Twitter following what opera endings they would amend given the chance, and what they would add or take away:

@RoyalOperaHouse Evgeni Onegin! Tanya doesn't get married to Gremin. I want to make a happy end with Onegin and Tatiana together, — Essie♫ (@SopEssie) August 27, 2013

@RoyalOperaHouse Rigoletto...the Duke ends up in the sack, Gilda falls for Sparafucile, Rigoletto for his sister & they all take over Mantua — Paul Parsons (@PGFParsons) August 27, 2013

@RoyalOperaHouse Grimes takes Balstrode's advice, proposes to Ellen, is accepted and they get the hell out of the Borough. — Sarah Noble (@primalamusica) August 27, 2013

@RoyalOperaHouse I'd have to save Manon at the end of Massenet's opera. Her death was traumatisingly emotional! — Alice Goodwin (@TheRhubarbTart) August 27, 2013

@RoyalOperaHouse @_paullay @ammonite: "Cosi" The lovers stay with their new partners, seize Alfonso and throw him into the ornamental lake. — Historylecturer (@Historylecturer) August 27, 2013

The production is staged with generous philanthropic support from The Royal Opera House Endowment Fund.