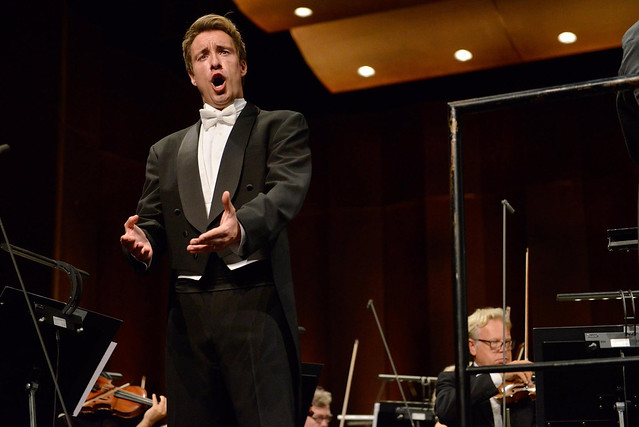 Up until the age of 28, Yuriy Yurchuk had never even seen an opera. He only took up singing lessonsas a new hobby after he moved to the United States from his native Ukraine. But recognizing the capabilities of his voice, his teacher encouraged him to pursue classical training and – aiming to inspire him – took him to see a performance of Offenbach’s Les Contes d’Hoffmann at the Lyric Opera of Chicago. Yuriy was hooked instantly and his head was turned from his job as a financial consultant at PwC.

‘Opera is an art form that is created to move people’, says the Kiev-born baritone. ‘The impact of watching that first performance, the following months of lessons and discovering the world of opera was strong enough to give me the momentum to change.’

Yurchuk decided that he would switch to consulting part-time, freeing him up to take up a programme at DePaul University School of Music. There he made his opera debut as Marcello in La bohème, followed by Ford in Falstaff. For two years, he combined work in the city with singing and studying. During this time, he discovered the Jette Parker Young Artists Programme at the Royal Opera House – a perfect fit that would allow him to continue his vocal studies while also giving him experience on a world-class stage.

‘People are hesitant when they reach 30 about making a change. But it’s never late to start doing something you love’, says Yuriy.

The JPYA Programme – which welcomes applications from all ages and nationalities – saw something special in Yurchuk. After being accepted in 2014, Yuriy recalls the challenge of keeping up with his colleagues, who had many more years of professional training behind them:

‘I used to get nervous. During my first performances I would go off the stage and not remember how it went’, he recalls. ‘Not anymore, though!’

The Programme supports the artistic development of talented singers as well as giving them the opportunity to cover roles and sing smaller parts in Royal Opera productions, training that Yuriy says has been key to honing his stage presence.

‘I believe in fully becoming my character before stepping on stage, thinking his thoughts, feeling what he feels. But as an opera singer, you can’t lose yourself in the moment because you also have to perform as a technician, staying with the conductor, remembering the blocking. You get more and more comfortable on stage, and the thrill of performing becomes addictive.’

Looking ahead, Yuriy is keen to sing the Verdi baritone roles – Rodrigo (Don Carlo), Germont (La traviata), Renato (Un ballo in maschera) and Di Luna (Il trovatore). Later this Season, Royal Opera House audiences can see him as Baron Douphol in La traviata and as Johann in Werther. Yuriy is most excited about singing Act III of Eugene Onegin in the Jette Parker Young Artists Summer Performance – a chance to sing the title role performed earlier this Season by Dmitri Hvorostovsky, a singer that Yurchuk has much admiration for. In September 2016, Yurchuk takes up a new contract as a Royal Opera Principal, a post which will allow him to stay on at Covent Garden after completing the Jette Parker Young Artists Programme.

As his career continues to grow, Yuriy hopes to share his experience that ‘it’s never too late’ with anyone feeling that they should have explored a talent. He’s also keen to encourage newcomers to opera:

‘I was and still am introducing opera to many of my friends who never saw one before. There is a misconception that it’s not for everyone. But magic is happening on that stage every night. Sometimes you just need to witness it once, and then there’s a good chance it will become a part of you for the rest of your life!’