The Australian baritone on singing alongside his heroes, and the extensive training it takes to become a professional opera singer. 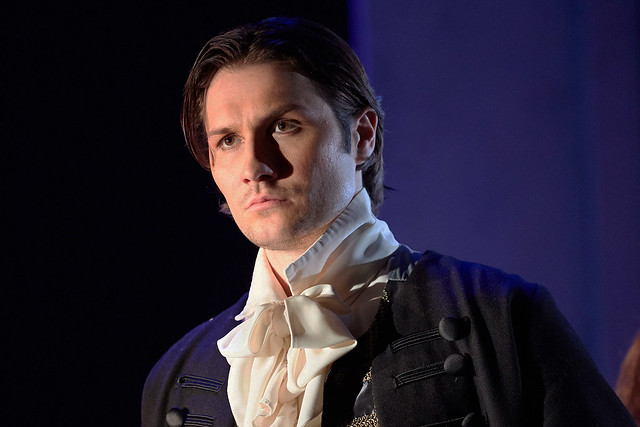 ‘The Royal Opera House is a Mecca for those who love opera. We all make the journey at one stage in our lifetime’, says Australian baritone Samuel Dale Johnson. As a second-year Jette Parker Young Artist, Johnson’s time at Covent Garden has been more than a little different from that of many opera devotees – and is the culmination of a lifelong passion.

Hailing from Queensland, Samuel’s engagement with opera started at a young age:

‘We always had something playing in the car and more often than not it was opera. Even driving to school, which was a forty-minute to an hour’s drive, we’d be listening to opera and would be singing along.’

Samuel was already studying piano and percussion when the conductor of his choir suggested the addition of singing lessons. He kept singing throughout his studies, even taking a chorus job while at University. ‘It was great because I got to see what the mechanics were within an opera company’, he says.

However, the decision to fully commit to opera was the result of Samuel’s first visit to Covent Garden on a trip to Europe. ‘The first thing I saw was Adriana Lecouvreur with Jonas Kaufmann, Angela Gheorghiu and Alessandro Corbelli. The moment Jonas Kaufmann opened his mouth, that was it for me.’

The remainder of the holiday was abandoned in favour of travelling to Sienna to study Italian linguistics and returning to Queensland to finish his studies ahead of an audition for the Jette Parker Young Artists Programme.

Following a competitive audition process that culminates in an audition on the main stage in front of Director of Opera Kasper Holten and Music Director Antonio Pappano, successful applicants to the Jette Parker Young Artists Programme join the Royal Opera House as salaried members of staff for a two-year period. During that time they receive daily coaching in everything from languages and stage technique to musical style while learning and covering roles. The Jette Parker Young Artists also sing smaller parts on stage and appear in concerts throughout the year.

Alongside the wide range of studies, the opportunity to work with established artists has clearly been inspirational for Samuel: ‘Even the top artists are always learning and we always learn from them – you can’t become an opera singer overnight’, says the baritone. ‘They give you everything you need here, including the chance to be able to learn with the best coaches and music staff in the world. It’s phenomenal.’

One such opportunity saw Samuel perform the duet ‘Au fond du temple saint’ from Bizet’s Les Pêcheurs de perles with Toby Spence in the 2015 Life Reimagined Gala, one of his highlights during his time so far at the Royal Opera House.

Samuel can currently be seen in Mariame Clément’s production of L’Étoile as Zalzal, after which he will appear in Àlex Ollé and Valentina Carrasco’s new production of Oedipe before sinking his teeth into a larger role for the annual Jette Parker Young Artists Summer Performance. This year’s performance features an extract from Leoncavallo’s version of La bohème, in which Samuel will sing the baritone role of Rodolfo. ‘It’s certainly a different role [from Puccini’s version]’, he says. ‘It’s very challenging and features incredible music. I’m very excited.’

Beyond this, the future is looking bright for the Australian. An engagement with Scottish Opera is scheduled in the coming year but the details are still under wraps. The baritone is particularly keen to develop his Mozartian repertory, but is in no hurry given his current opportunities. ‘You just want it to happen naturally and gradually’, he says.