The British tenor on swapping rock and drum and bass for a career as an opera singer. 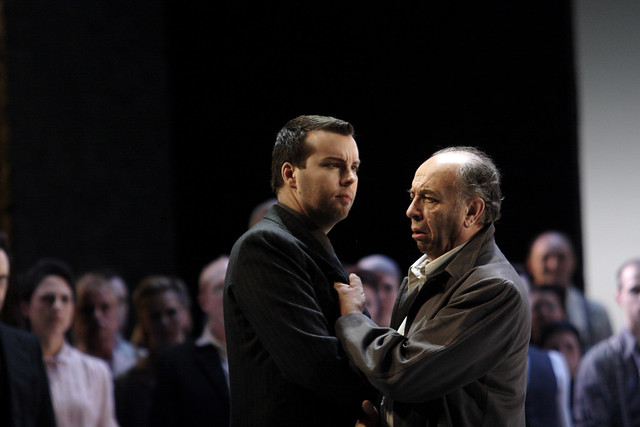 ‘Opera didn’t become a pleasure until I was in my early twenties really,’ says Jette Parker Young Artist David Butt Philip, a baritone-turned-tenor from Somerset.

‘I always sang; I was in the church choir from the age of seven and a chorister at Peterborough Cathedral until I was 14, which really instilled a love of choral music and the intense routine of performance, but at school I was in rock bands, obsessed with Pearl Jam and Nirvana, dreaming about becoming a rock star myself.’

David, who joined the Jette Parker Young Artists Programme in 2012, has notably diverse music tastes. ‘When music is the passion of your life, you want to hear everything. On my iPod on the way to work it’ll be Jurassic 5 or Roni Size or something like that. In the mid-90s I was obsessed with guitar music; while after Glastonbury 1997, I became obsessed with electro and drum and bass.’

A career in classical music didn’t cross David’s mind until he started university, studying Philosophy and Politics at the University of Liverpool. ‘I must have been about 19 when I rediscovered my love of choral music and re-integrated myself into the classical mainstream. I joined the University choir and found I was spending all my time on music rather than studying my degree. I dropped out and went to music college.’

Advised to go professional, he joined the Royal Northern College of Music:  ‘I didn’t have my first singing lesson until I was 22. The advantage now is that it feels like a novelty to me. I have this child-like excitement about every piece and I’m never bored.’

David will soon be performing on the main stage in Richard Eyre’s production of La traviata. ‘[It] has possibly the highest number of memorable tunes of any opera,’ says David. ‘And the production is a real classic – telling the story in a simple but beautiful way. It was a massive hit on its premiere and has been going strong for 20 years.’

David will be singing the role of Gastone de Letorières, performing alongside Simon Keenlyside as Giorgio Germont, Ailyn Peréz as Violetta, and Stephen Costello as Alfredo - the role he will cover in the production.

‘The cast is great,’ he says. ‘Simon Keenlyside was my hero at college – the singer I most admired and wanted to emulate when I was a baritone; while Stephen Costello and Ailyn Peréz are at the top of the tree in terms of young international artists. It is an amazing opportunity for me to cover a core role. To learn one of the most iconic lead roles, and see world-class artists up close in rehearsals for a production like this, is invaluable. It is the greatest opportunity a young artist could ask for!’

A week before starting rehearsals for La traviata, David was performing in Strauss’s mighty Die Frau ohne Schatten, having been asked at the last minute to sing the Apparition of a Youth.

‘I’ve never done anything like that before – I had to learn the role in just 24 hours,’ he says. ‘It is very complex musically, and vocally it’s incredibly taxing, but it’s so rewarding when it comes off. The audience goes completely berserk; I’ve never seen anything like it in Covent Garden!’

Earlier this Season, David performed in Puccini’s Turandot and Wagner’s Parsifal; at the start of his time with the JPYA Programme, he made his main stage debut in Laurent Pelly’s production of Meyerbeer’s Robert le diable.

‘Robert le diable was a real learning experience; it was great to be involved in an unusual piece, of mammoth proportions, that was also a new production,’ he says. ‘It is different to a revival as you have the luxury of a long rehearsal period – you are creating as you go, contributing to the creative process; I was working with an amazing director and the singing was spectacular – Bryan Hymel really is an extraordinary performer.’

‘The breadth of repertory at The Royal Opera is amazing,’ he adds. ‘This year alone, I’m performing Puccini, Wagner, Verdi, Strauss and Poulenc. Last year it was Meyerbeer, Verdi, Mozart, Britten, Strauss and Puccini.’

David will be performing in La traviata, followed by Dialogues des Carmélites and Ariadne auf Naxos. The Jette Parker Young Artists Programme is supported by Oak Foundation. Find out more about the programme.