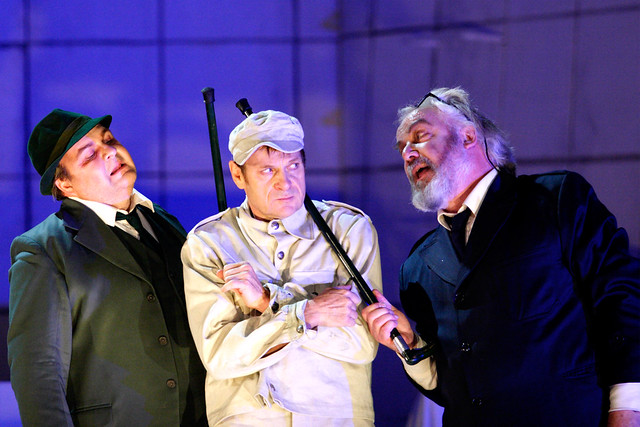 Gerhard Siegel as the Captain, Simon Keenlyside as Wozzeck and John Tomlinson as the Doctor in Wozzeck © ROH / Catherine Ashmore 2013

The Royal Opera’s production of Berg’s Wozzeck will be broadcast by BBC Radio 3 on Monday 2 December at 7.30pm.

The production features a stellar cast including Simon Keenlyside in the title role, Karita Mattila as Marie, John Tomlinson as the Doctor, and Gerhard Siegel as the Captain. Mark Elder conducts.

Considered one of the most important works of the 20th century, Wozzeck is a harrowing psychological drama based on Georg Büchner’s incomplete play Woyzeck – one of a number of adaptations of the tale. The title character is a poor solder who is battling mental illness while trying to support his common-law wife and son. Exploited by a selfish doctor for medical experimentation and taunted for his poverty and inarticulacy, he spirals into despair, driven to murder the only person he loves. Find out more about Wozzeck with our Opera Essentials series.

Gerhard Siegel as the Captain, Simon Keenlyside as Wozzeck and John Tomlinson as the Doctor in Wozzeck © ROH / Catherine Ashmore 2013

Karita Mattila as Marie, Endrik Wottrich as Drum Major and Sebastian Wright as the Child in Wozzeck © ROH / Catherine Ashmore 2013

Dramatic, rapturous and – at times – terrifying, Wozzeck received instant acclaim after its premiere in Berlin in 1925. The score is richly varied, vividly depicting the horror of Wozzeck’s near-madness, the sadism of the Doctor and the Captain and the tenderness of Marie. Berg also uses the technique of Sprechgesang, ‘speaking in song’. Wozzeck was the focus of a ROH Insight event we recorded with conductor Mark Elder.

Read audience reactions to the opening night and add your own review.

Other forthcoming BBC Radio 3 broadcasts of Royal Opera productions include Wagner’s Parsifal, which will be broadcast live on 11 December.