Woolf Works Dance Highlight: Pas de deux of reminiscence in ‘I Now, I Then’

Wayne McGregor embraces classical lyricism in the first movement of his ballet triptych inspired by the writings of Virginia Woolf. 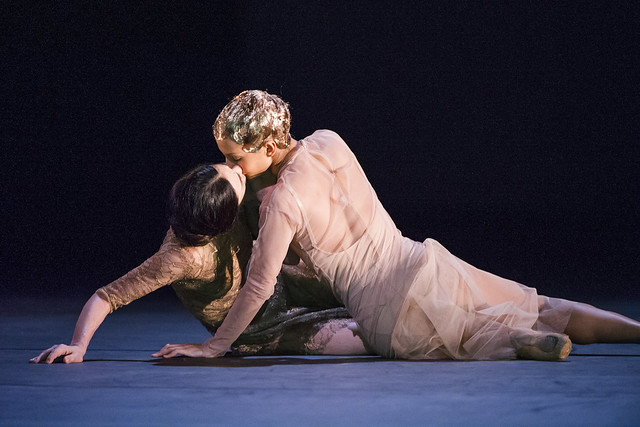 ‘I Now, I Then’, the first part of Wayne McGregor’s ballet triptych Woolf Works, draws on one of Virginia Woolf’s best-loved novels, Mrs Dalloway. Paring the work back to its essentials, the ballet vividly evokes the author’s ‘psychological realism’ by blurring past and present, merging thoughts with reality and enmeshing Woolf’s own life with those of her protagonists.

One way in which McGregor echoes this layered, stream-of-consciousness style is to present several characters simultaneously, exploiting dance’s capacity for them to ‘speak’ all at once. Alessandra Ferri embodies both Virginia Woolf and her creation Clarissa Dalloway, McGregor taking full advantage of her unique qualities as a dance-actor to inhabit the entangled inner worlds of these two women. McGregor also introduces a young Clarissa figure (created by Beatriz Stix-Brunell), with choreography that weaves together her perspective and Ferri’s in a powerful visual interpretation of one of the novel’s key themes.

A poignant moment of reflection catches Clarissa recalling her youthful relationships. Alone, she pauses as the memory of her younger self appears. Time and perspective seem to shift as this figure walks slowly past before launching into a flurry of spontaneous movement. As Clarissa – or Woolf herself? – stands by, young Clarissa is joined by a man (created by Federico Bonelli); perhaps a memory of Woolf’s character, Peter, who constantly invades the protagonist’s memories in Mrs Dalloway:

in the streets of London, on the ebb and flow of things, here, there, she survived, Peter survived, lived in each other"

In the ensuing pas de deux between the young lovers, McGregor’s lyrical, expressive choreographic language conjures nuances of their relationship. Elements of their movement recall McGregor’s powerful signature style – rippling torsos, distorted positions, flexed feet. But these distinctive movements
are presented within a more intimate, classical vocabulary. Their partnerwork – Peter sweeping young Clarissa across the floor on pointe, and off her feet in a series of lifts – even recalls giddy moments of young love in Kenneth MacMillan’s choreography, in such ballets as Romeo and Juliet,Manon and Mayerling. But amid this ecstatic flow of movement, young Clarissa pauses wistfully, frozen in simple classical positions, as if distracted by thoughts of – something? Someone? Gradually, a ticking clock that has pervaded Max Richter’s yearning score almost without us noticing, comes to the foreground, getting louder and louder until we hear the chime of Big Ben…

As Peter spins off to one side, Clarissa watches after him nostalgically. Then, suddenly, her wistful look changes to one of rapture as on runs a lithe, dainty figure dressed in pink gauze – the novel’s young Sally Seton (created by Francesca Hayward). Young Clarissa and Sally dance together, at first in an innocent, almost childlike canon, filled with fleet, buoyant footwork. In this memory, young Clarissa is clearly mesmerized by Sally, watching and following her in awe until, breaking out of their canon, their movements come together in unison and they clasp hands, exchanging the briefest of kisses.

Then came the most exquisite moment of her whole life passing a stone urn with flowers in it. Sally stopped; picked a flower; kissed her on the lips. The whole world might have turned upside down!"

Remembering this moment, older Clarissa rises. As the two girls continue to dance together – their arms and épaulement as expressive as a conversation – the gentle sensuality hinted at in their earlier choreography builds. They approach each other in a moment of tenderness, just as older Clarissa reaches them. Suddenly, the music that has been building to an ecstatic climax stops, the lights drop and bells chime. Once again we feel ourselves spun through time, the boundary between now and then, reality and fiction blurred even further as Ferri’s character – perhaps older Clarissa, or Woolf herself – melts to the floor with Sally, stealing a lingering kiss.

The production is given with generous philanthropic support from The Tsukanov Family Foundation.