The 10 winning fanfares will be recorded by Antonio Pappano and the Orchestra of the Royal Opera House. 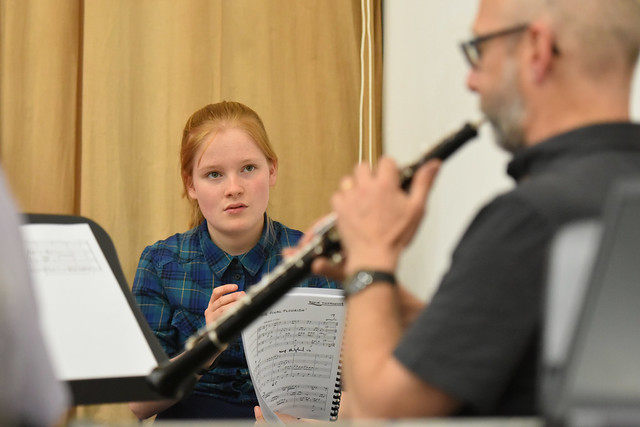 Rosie Thorogood, one of the winners of the Fanfare competition 2016 © ROH 2016. Photograph by Brian Slater

Winners of the 2016 Fanfare competition have been announced.

The competition invites young people aged 11–18 from across the UK to compose their own fanfare, drawing on musical motifs from the Royal Opera House’s ballet and opera repertory.

Winners have the opportunity to hear their fanfares recorded by the Orchestra of the Royal Opera House, before they are played to thousands of audience members attending a performance throughout the Season.

Last week the 11 winners came to the Royal Opera House to take part in workshops, working with composer Duncan Chapman and members of the Orchestra to arrange and perfect their fanfares.

'We listened to all the pieces and then started to mess around with them a bit,' said Bronwyn from Potton in Bedfordshire.

Owen Davies, who had caught the sleeper train from Land's End the night before, agreed saying, 'You get so used to computer sounds. It's so useful to be able to actually hear your music, especially by professional musicians who know their instruments so well.'

The winning fanfares were chosen from 129 entries, and selected by a panel of musicians and staff members from a range of departments across the Royal Opera House, including Music Director of The Royal Opera Antonio Pappano.

Kit McCarthy from Fife had entered the competition twice before so was thrilled when he found out his third attempt had been victorious. 'The first piece I did was nice, but I just don't think it was interesting enough', he said. 'Then my second was shortlisted because it was a little more unusual – so this year I decided my entry had to be really ear-catching!'

The fanfares will be recorded by Antonio Pappano and the Orchestra of the Royal Opera House in June. Audiences in Covent Garden will hear the first fanfare before the Season opening performance of Norma on 12 September 2016.

For Tammas Slater from Guiseley in West Yorkshire, the prospect of his fanfare being played to thousands of audience members a year is thrilling.

'I’m very excited that it’s going to be heard,' he said. 'I want my music to be heard or there would be no point in my writing it!'

'I hope there’s a little bit of everything in my fanfare, so I don’t mind what production it's played before. I’m not picky!'

For the full list of winners, and to hear the original entries, visit our Fanfare pages.