Wilde at heart: the surreal brilliance of Gerald Barry’s The Importance of Being Earnest 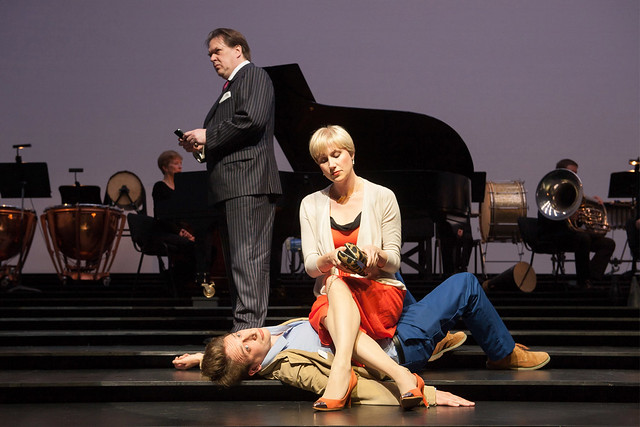 Paul Curievici as John Worthing, Stephanie Marshall as Gwendolen and Alan Ewing as Lady Bracknell in The Importance of Being Earnest © ROH / Stephen Cummiskey 2013

Gerald Barry’s The Importance of Being Earnest was always going to be a fairly reckless project. Wilde’s masterpiece is the most enduringly popular play of the Victorian era. Its structure is so finely wrought, and its dialogue so crisp, that it does not easily lend itself to the sort of savage cuts that operatic adaptations tend to entail. But, perhaps against the odds, in the five years since its premiere in Los Angeles Barry’s Earnest has become a contemporary classic. All, perhaps, because of just how reckless his adaptation is.

Earnest was written in a mere eight months. The composer’s haste is essentially audible: at every moment in it, decisions are made that conventional wisdom would simply not tolerate. The text is heavily cut, but all the references to food are left in. Lady Bracknell is played by a big, booming bass with Teutonic tendencies. And so on. The cumulative effect of all the opera’s oddities is overwhelming: Barry makes his singers – and the orchestra, of course – jump about like manic puppets.

Despite all the plate-smashing and megaphone-wielding and jackboot-stomping, though, the opera also manages to tell Wilde’s story in an effective, critical way. Even after the many cuts to the text, the plot is all still there, and so are many of Wilde’s choicest turns of phrase – some of the opera’s funniest moments, in fact, are Wilde’s and not Barry’s. Barry gives the play an enormously idiosyncratic coating, but he doesn’t smother it.

Take the way he portrays the characters. Jack’s high tenor reflects his status as a romantic lead, but his top notes are seldom ecstatic lyrical climaxes, and more often moments of panic or idiocy. Algernon, a baritone, occasionally functions as the calmer counterbalance to his fellow Bunburyist, but he is not permitted to become the witty, Wildean character he might be. ‘All women become like their mothers. That is their tragedy. No man does. That’s his’, he declares, but the delivery is so stilted and weird that it comes across rather try-hard. Our sympathies are very much with Jack when he replies: ‘Is that clever?’

Barry’s surreal tendencies become a vivid prism through which to consider the stilted social conventions that Wilde’s text sends up. At other times, it is the canonic status of the play itself that Barry’s adaptation ridicules, as when one of the most cherished passages – Lady Bracknell’s advice that Jack ‘try and acquire some relations as soon as possible’ – is repeated over and over again in a progressively sillier little jig. Barry interrogates the play’s place in history, mocking its familiarity even while celebrating its brilliance.

In Earnest, then, Barry and Wilde stand side by side, different and yet together, and the opera thrives on the companionable clash generated by their highly contrasting styles. ‘Reckless’ is perhaps not the right word: clearly, Barry has realized the vital importance of not being Wilde.

This is an edited extract from Paul Kilbey’s article ‘The Importance of Not Being Wilde’ for The Royal Opera’s programme book for The Importance of Being Earnest, available to buy during performances.

This article has been categorised Opera and tagged by Ramin Gray, Gerald Barry, oscar wilde, Production, programme trail, The Importance of Being Earnest, trail