Why Puccini is the Alfred Hitchcock of music

Antonio Pappano on his three-decade love affair with the composer's works, and why he's excited for La bohème. 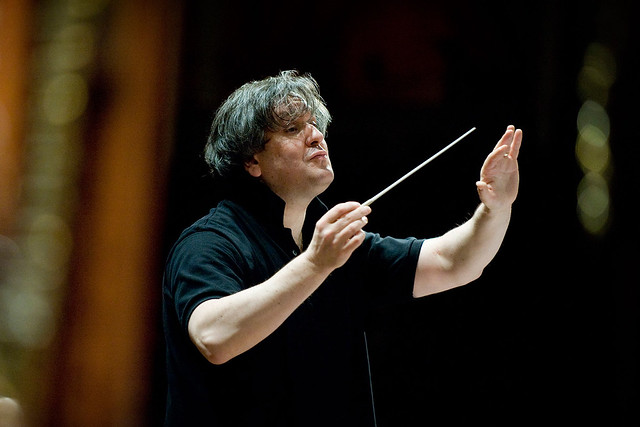 When The Royal Opera opens the 2017/18 Season with La bohème in September, it will be the Company’s first new production of the piece since 1974. Charged with the responsibility of replacing the much-loved John Copley version – which was gracefully retired in 2015 – are director Richard Jones and The Royal Opera’s Music Director, Antonio Pappano. Over the years they have forged a regular and entirely successful artistic relationship, bringing audiences numerous acclaimed productions, including Lady Macbeth of Mtsensk, Boris Godunov and – not least – Puccini’s triptych of one-act operas, Il trittico.

Pappano himself has enjoyed a long and notable relationship with the piece, which he conducted for the first time in Oslo back in 1987 as his very first opera in the theatre. He reprised it as his first date at the Royal Opera House in 1990 – an occasion he recalls as ‘a trial by fire. I jumped in for John Pritchard, who had recently passed away, and of 14 performances, for the first seven I had seven different tenors!’. Pappano would go on to make a much acclaimed studio recording five years later, but the new staging will be his first full-scale encounter with La bohème for 15 years – ‘though I’ve coached it quite a bit when I do masterclasses with young singers. The arias often come up, so somehow it’s never far away. I try to remember things I’ve said to build up a bank of little ideas that I want to bring to it next time around. It’s certainly been cooking!’

He has clear thoughts on Puccini’s most popular score. ‘The piece is about young people. I didn’t go to conservatory or college and I’ve never roomed with anybody in my life, so I don’t have the experience of four guys together; but I’ve imagined that feeling of camaraderie many times, and it’s very much a picture of Puccini’s own student life in Milan – he knew hardship and starvation and cold.’

Though Puccini has had his critics over the years, this opera seems to be pretty well universally admired, ‘mainly,’ Pappano thinks, ‘because of the timing of events. When you’ve had enough of the guys and their sophomore behaviour, you get that magic knock on the door. Mimì enters, and the whole thing just turns, and from there you get Rodolfo and Mimì singing arias that are mini-autobiographies; it’s like you’re getting to know someone because they tell you their story – she’s a bit more truthful than he is, he’s a little bit more extravagant. They sing a love duet, and they go out to dinner. Then you get the crowd scene as opposed to an intimate scene, so the balance of the piece is very smart.’

Moving on to Act III, ‘you really get to the heart of the matter. It’s devastating.’ With the death of Mimì in Act IV, ‘people say that even if it’s performed badly, it works. Yes, but when it’s performed well it can be really touching and beautiful. This is a young person who is dying, and tuberculosis is a terrible thing.’

Pappano is also looking forward to renewing his collaboration with Jones. ‘He’s maniacal for precision, not only precision of movement but also of thought and expression. He always tries to find the right word to say to a singer so that they get it, and he’s very meticulous in a way that helps me be as meticulous. You might think of Richard as being cool and slightly intellectual, but actually if you look at something like Suor Angelica it’s genuine and it’s heartbreaking.’ Can he give some idea of what we will see?

‘It’s going to be quite sparse – until it’s not! In the second act, there will be a lot of fun and games. But these kids are poor. I was very aware of the need to choose singers who have that youthful quality but who are not beginners.’

How has his own interpretation changed? ‘I conduct completely differently to the way I used to. I think of music differently, and I have different preoccupations. Harmony is much more important to me. I don’t have to concentrate on the melody – that tends to come naturally – but it’s about how to support that melody and what’s around it in terms of detail and theatrical timing.’

Having had the experience not only of repeatedly rehearsing and performing these pieces, but also of recording quite a few of them, Pappano thinks that ‘the level of sophistication that you’re up against is incredible. You have these wonderful orchestral effects and detail in the way singers need to render this stuff. You have to strive to render as much of what’s on the page as possible. It’s impossible, because the scores are so detailed. There’s an innate sensibility and craftiness as well as craft. He’s been crucified for that, as if that expertise were deemed manipulative – like a Hitchcock perhaps. But you try writing for theatre – it’s very hard to succeed.’

I ask the conductor to nominate some favourite moments. ‘I love the duet between Mimì and Marcello in Act III. I love the trio that follows it when she’s off hiding behind a tree. Then there are the two arias back-to-back in the first act. But my favourite moment is in the first act when Mimì loses the key and there’s a particular melody that comes back when she’s on her deathbed, and she says “Do you remember?”, and it’s written in a slightly different tempo and in a different filter, if you like, with a kind of a halo of orchestration. Absolutely beautiful!’

He also reminds me that the very opening of the opera – the busy Allegro vivace that accompanies Rodolfo and Marcello working away in their attic – ‘is taken from a piece called the 'Capriccio sinfonico', written when he was a student. He saw that with this music he could create the hustle and bustle and unkempt quality of these boys, and it’s genuinely young and fresh. It’s a masterstroke.’

The production is staged with generous philanthropic support from Mrs Aline Foriel-Destezet, Mrs Susan A. Olde obe, The Royal Opera House Endowment Fund and The American Friends of Covent Garden.