What does it all mean? Searching for answers to Thomas Adès's brain-scrambling The Exterminating Angel 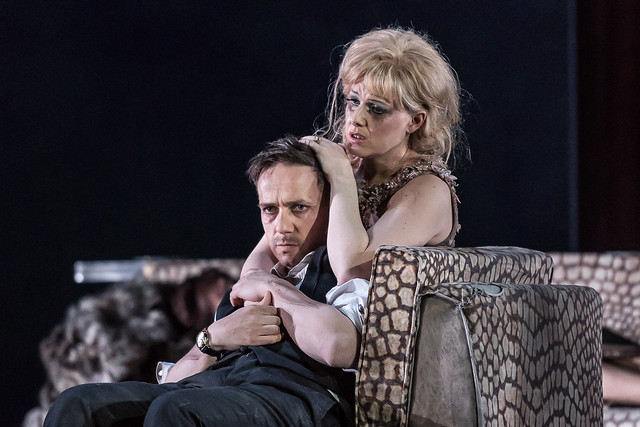 Jean-Paul Sartre famously said, ‘Hell is other people’ and what could be more hellish for a genteel guest at the end of a long evening's indulgence than a dinner party they cannot leave? This is what happens in Luis Buñuel’s 1962 film The Exterminating Angel, when a group of wealthy bourgeoisie gather at a grandiose house after a night at the opera and inexplicably find themselves unable to leave.

The Exterminating Angel has now been brought to the stage as an acclaimed opera by Thomas Adès with a libretto by Tom Cairns closely following the script of Buñuel’s film, complete with an appearance by live sheep. But what does it all mean? For clues, it's probably best to go back to the originating work.

Frequently surreal, often anarchic and occasionally blasphemous, Buñuel explored themes of religion, sexual desire and the hypocrisies of the upper classes in his film-making. In particular, he seemed fascinated by one of the most revered rituals of the modern bourgeoisie – the dinner party. He used surreal dinner party scenes to erode the façade of manners and social norms that exist in civilized society. Quite appropriate then that The Exterminating Angel should become an opera because, as we well know, operatic parties usually don’t go according to plan.

Buñuel was a fan of opera and included operatic references in a number of his films. Characters in The Exterminating Angel include a conductor, a pianist and an opera singer, nicknamed ‘Valkyrie’, who eventually delivers the guests’ salvation. Buñuel used music from Tristan und Isolde to follow the sexually frustrated lovers in L’Age d’Or (1930) and the same opera comes up again in the dinner conversation in The Phantom of Liberty (1974).

Prior to his film career, Buñuel considered becoming an entomologist and in The Exterminating Angel he puts his cinematic magnifying glass on humanity after trapping them like insects in an enclosure of their bourgeois comforts. Like animals who can sense encroaching danger, the servants flee before the calamity unfolds, leaving the bourgeoisie to fend for themselves. The previously polite behaviour of the guests progressively deteriorates, dignity falls away and they regress to primal instincts when confronted with their mortality. Designer clothes become disheveled, furniture is smashed to make fire and household pipes are broken into for water.

Reportedly Buñuel had the idea for the film from a friend who suggested that Géricault’s harrowing painting The Raft of the Medusa would make a good starting point for a film. Woody Allen would later imagine this scenario differently in his 2011 film Midnight in Paris, in which a time-travelling author finds himself in 1920s Paris socializing with the likes of Ernest Hemingway, Salvador Dalí and Gertrude Stein, and suggests the idea to a perplexed Luis Buñuel at a party.

The director had already explored the ritual of the dinner party in Viridiana, which was released a year prior to The Exterminating Angel and contains one of the greatest dinner party scenes in the history of film. A group of beggars and misfits take over the house of their wealthy, pious benefactor and run amok in a sacrilegious re-enactment of Da Vinci’s Last Supper, bringing Buñuel’s criticism of religion to the fore.

And if The Exterminating Angel is Buñuel’s vision of the never-ending dinner party, then The Discreet Charm of the Bourgeoisie (which followed in 1972) features a dinner party continually in gestation, as a group of socialite friends constantly have their dinner plans thwarted by bizarre occurrences or enigmatic misunderstandings. Buñuel once again mocks the habits of the bourgeoisie. In one scene, Buñuel explicitly aligns behaviours at a dinner party to a performance when a side wall comes up and the friends are suddenly revealed to be dining on stage. One guest sweats when he forgets his lines, fearful of not displaying appropriate behaviour.

So what is stopping the guests from leaving the party in The Exterminating Angel? Is it a subconscious Freudian repetition compulsion where one is unable to break out of destructive patterns? Is it commentary from Buñuel about religion, showing the risks of mass belief in the irrational? Is it a political statement on the excesses of Franco’s Spain? Or is it mocking the mores of the upper classes, so oppressed by their own social rules that everyone is too polite to be the first one to depart a dinner party?

As a surrealist Buñuel blurred the boundaries between reality and dreams, portraying the absurd. He sought to elicit a response from the subconscious, rejecting conventional narrative and the desire to make sense out of the inherently inexplicable.

Fittingly Buñuel refused to provide an explanation for the events of The Exterminating Angel, instead telling his audience, ‘If you find the film you are about to see enigmatic or incongruous, so is life. It is repetitive, like life, and open, as life is, to many different interpretations. Its director claims it is not symbolic, or at least not consciously so. And it may well be that the best explanation for The Exterminating Angel is that, rationally, there is no explanation…’

The Exterminating Angel runs until 8 May 2017. Tickets are still available.

The production is a co-commission and co-production with Salzburg Festival, the Metropolitan Opera, New York, and the Royal Danish Opera and is staged with generous philanthropic support from Stefan Sten Olsson, The John S. Cohen Foundation and The Boltini Trust.