In one of the opera's most heart-wrenching moments, Massenet gives us a crucial insight into his heroine’s tortured soul, as she reflects on a love that can never be. 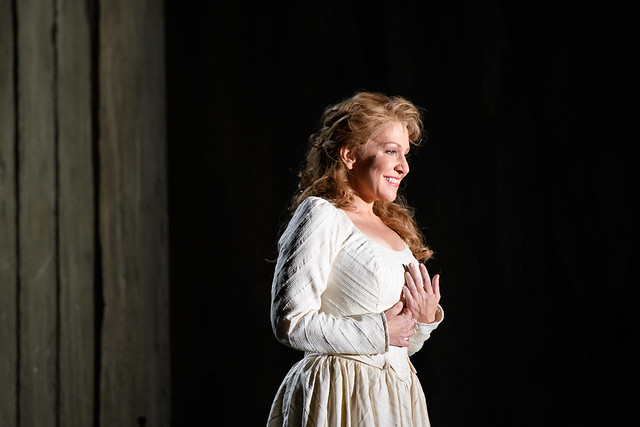 Charlotte is an enigmatic figure in Goethe’s novel The Sorrows of Young Werther, the inspiration for Massenet’s opera Werther. Goethe tells his story almost entirely from Werther’s point of view, with only occasional hints about what Charlotte – the woman Werther unhappily loves – might think and feel. Massenet follows Goethe’s lead for the first two acts of his opera, but at the start of Act III he radically departs from his source material: in the extended solo scene the ‘Air des lettres’, he gives us an insight into Charlotte’s soul.

Charlotte has married her longterm fiancé Albert. After her marriage she ordered the lovelorn Werther to leave their district until Christmas. He obeyed, but has written to her regularly. Act III opens on Christmas Eve. Werther has been absent for three months, Albert is away and Charlotte re-reads Werther’s letters to herself. Even before her first words, the orchestral introduction – with its opening dark-hued, dissonant chords, rapid shifts between tenderness and turmoil and closing funereal motif in the low strings – reveals her unhappiness.

The ‘Air des lettres’ opens in arioso: a free style between song and recitative that mirrors Charlotte’s anxiety. The light orchestral accompaniment – with some of Charlotte’s lines unaccompanied – creates a sense of intimate confession. Charlotte meditates on her growing longing for Werther, and softly admits that she can’t stop thinking about him. The music conveys her agitation through rapid changes of tempo and dynamics as she describes how she constantly re-reads Werther’s letters and cannot bring herself to destroy them.

As Charlotte reads from one of these letters, her mood settles into melancholy. The slow tempo, long descending phrases (perhaps illustrating the icy winter wind outside) and Charlotte’s repetitions of the word ‘seul!’ (alone) vividly evoke the loneliness Werther expresses in his letter. It’s too much for Charlotte to bear, and she breaks off to ask how she could have condemned him to such isolation. In need of comfort, she turns to a second letter. Immediately, the mood of the music changes as a bright major key, delicate orchestral textures and little flourishes in strings and woodwind illustrate Werther’s happy memories of Charlotte’s younger siblings. Charlotte’s vocal line rises and becomes increasingly lyrical as she playfully reassures the absent Werther that her family hasn’t forgotten him. But her memory of Werther’s most recent letter destroys her tranquillity, and brutally wrenches the music into a minor key and a stormy atmosphere.

In this third and final letter, Werther has informed Charlotte that if he does not return at Christmas he will have killed himself. Massenet evokes Charlotte’s terror by a variety of means: a motif in the brass associated earlier in the opera with Werther’s suicidal thoughts; a wide-ranging, declamatory vocal line; sudden surges in dynamics; agitated tremolo strings; and snarling brass interjections. There is a brief lull as Charlotte reads compassionately of how Werther imagines her weeping over his letters, but her anxiety soon overpowers her, and she cries out in anguish Werther’s prophetic words: ‘Ô Charlotte, tu frémiras!’ (you will tremble). Repeating the phrase twice – the second time in a low-pitched monotone – she collapses in emotional exhaustion.

The ‘Air des Lettres’ is the first point in the opera that Charlotte abandons her persona of the tranquil and dutiful daughter, sister and wife to admit her conflicting and passionate feelings. Her emotional honesty and her remorse instinctively awaken our sympathies. For the remainder of the opera we will feel as much compassion for Charlotte as for her unhappy lover, as she struggles between desire and her sense of duty, and at last, in Act IV, confesses her secret love to Werther.