Watch: Members of The Royal Opera on Rise and Fall of the City of Mahagonny

Backstage films from the live relay of Rise and Fall of the City of Mahagonny, including rehearsal footage and exclusive interviews. 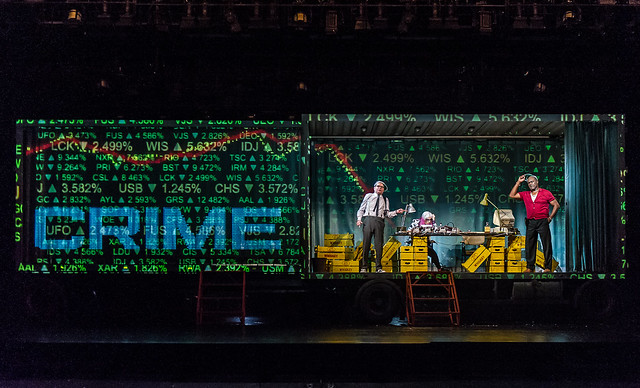 Anne Sofie Von Otter,Trinity Moses and Peter Hoare as Fatty in Rise and Fall of the City of Mahagonny © ROH.Clive Barda 2015

John Fulljames’ Royal Opera production of Rise and Fall of the City of Mahagonny, starring Anne Sofie von Otter and Peter Hoare, was screened live in cinemas across the world on 1 April 2015.

An introduction to Rise and Fall of the City of Mahagonny

'Mahagonny is a city which is thriving on migration, a city which sits at the heart of the world,' says John Fulljames of a setting that perfectly reflects London in 2015. The opera tells the story of four lumberjacks from Alaska who are drawn to a recently-formed city by the promise of endless pleasures. However, Jimmy MacIntyre - sung by Kurt Streit - soon finds that when the city falls into economic dismay and criminal rule takes over, 'the root to happiness is freedom', and not the false empowerment of debauchery.

 Conductor Mark Wigglesworth argues that the music of Rise and Fall of the City of Mahagonny intends to jar the audience. While tunes are catchy, they are meant to get the audience 'thinking, not feeling,' he says. Kurt Weill’s score reflects 'the cabaret of Berlin of his day' and is a fusion of the differing musical styles that were flowing through the city at the time, including jazz. Wigglesworth imagines that Weill and Brecht would have particularly connected with this particular genre, which explored 'being free and individual'. 'It’s always scratching and tearing,' says Willard W. White, who sings the role of Trinity Moses:

Es Devlin on Mahagonny's set and designs, and what inspired it

Set designer Es Devlin describes how her neighbourhood, Peckham Rye, inspired her to place lorries on the stage. These trucks expand and rotate on stage like a 'box of tricks'. John Fulljames particularly likes how these trucks help demonstrate to audiences that 'everything on set is a construction'. As well as physical sets, the production also features extensive video projects, described by Video Designer Finn Ross as behaving 'like another character':

The Royal Opera House Cinema Season broadcasts performances to more than 1,600 cinemas in 60 countries around the world. Check the website to see if there's an encore of Rise and Fall of Mahagonny near you.

The next live relay of 2014/15 will be The Royal Ballet's La Fille mal gardée on 5 May 2015. Find your nearest cinema and sign up to our Cinema mailing list.

This article has been categorised Opera and tagged by John Fulljames, cinema, films, interval, live, Production, relay, Rise and Fall of the City of Mahagonny