Watch: Members of the cast and creative teams on Romeo and Juliet

Backstage films from the live relay of Romeo and Juliet including rehearsal footage and exclusive interviews. 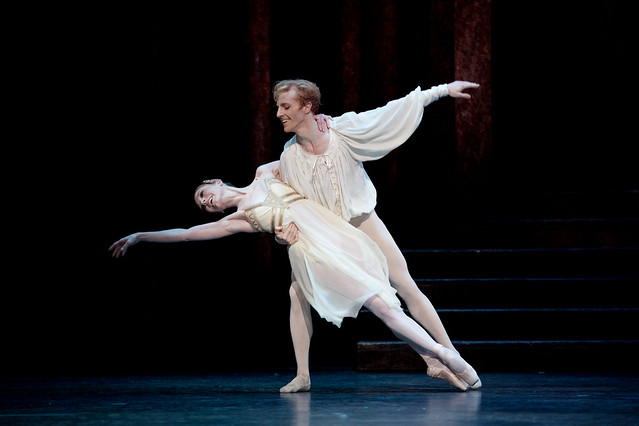 Steven McRae as Romeo and Sarah Lamb as Juliet in Romeo and Juliet © ROH 2015. Photograph by Alice Pennefather

Kenneth MacMillan’s Royal Ballet production of Romeo and Juliet, starring Sarah Lamb and Steven McRae, was screened live in cinemas across the world on 22 September 2015.

An introduction to Romeo and Juliet

For Kevin O’Hare, the artistic union of Shakespeare, Prokofiev and MacMillan is ‘the perfect blend’. In this film, both Steven McRae and Sarah Lamb discuss the journey their characters undertake during the ballet, from the initial ‘naivety’ Steven sees in Romeo to Juliet’s rejection of convention. ‘Shakespeare perhaps created one of the first feminists in Juliet’, says Sarah.

The emotional and physical are inextricably linked in Romeo and Juliet, with the fight sequences containing as much feeling as the star-crossed lovers’ pas de deux. Gary Avis, who dances Tybalt, says of the character's fight with Romeo: ‘You’re driven by the pure adrenaline of it all. It’s so brilliantly crafted and constructed as a sword fight.'

Fifty years after the production had its premiere, Donald MacLeary, one of the original three Romeos, discusses one of his favorite roles. The production has always inspired passion, both from choreographer Kenneth MacMillan and audiences. MacLeary highlights the production’s ‘huge’ success, with the company, then led by Margot Fonteyn and Rudolf Nureyev, receiving a twenty-minute standing ovation on the original first night.

MacLeary spoke to presenter Darcey Bussell, who he coached as Juliet during her time as a Principal with The Royal Ballet, recollecting stories from his own time as Romeo: ‘One time I was doing the Tybalt fight, and I’m supposed to win…  my sword broke… luckily one of the corps de ballet threw me a sword!’.

Behind the scenes during preparations for Romeo and Juliet

Romeo and Juliet combines ballet with action sequences and involves a large Company. On a tour of the theatre, David Pickering and Dominic Peckham caught a glimpse of Steven McRae rehearsing with répétiteur Lesley Collier, who has herself danced the role of Juliet. This is typical of The Royal Ballet’s répétiteurs, coaches, ballet masters and mistresses, as Pickering explains: ‘They’re great teachers but they’ve had first-hand experience of dancing within the productions’.

‘The pas de deux were like a jewel in a ring’, says the choreographer's widow, Deborah MacMillan. This core component of an otherwise vast production portrays the evolution of Romeo and Juliet’s relationship, from their initial shyness to their final moments together. Steven highlights just how key the continuity is by Romeo and Juliet’s second appearance together: ‘You see them gradually loosen up with each other and obviously that’s when they genuinely fall in love.'

The next production in the Royal Opera House Live Cinema Season will be The Royal Opera's Le nozze di Figaro on 5 October 2015. View all upcoming screenings and sign up to our mailing list.