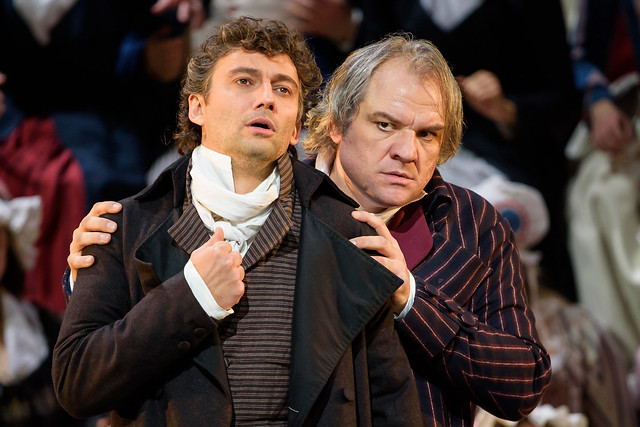 David McVicar's Royal Opera production of Umberto Giordano's Andrea Chénier was relayed live to cinemas around the world on 29 January 2015.

An Introduction to Andrea Chénier

'It's a story about real people, real locations in late 18th-century France,' says set designer Robert Jones. 'We begin in a chateaux of a very wealthy aristocratic family cocooned from the outside world. They're surrounded by the finest silver, chandeliers, the finest food and furniture - they're not really aware of what's going on outside; they live in an ivory tower and we're about to see this family fall at the hands of the French Revolution.'

Watch the cast and creative team introduce the opera, and explain why it's a work that they love:

'The qualities of the singer as an actor are exposed [in Andrea Chénier], so I'm constantly working in the rehearsal room to get the singers to fill the silences with their own intensity,' says Antonio Pappano.

'We've been working hard not just to do the music and the melodies, but to make it alive,' says soprano Eva-Maria Westbroek, who sings the role of Maddalena di Coigny.

'My brief was really simple - not to produce a concept to design but to make it real,' says production designer Jenny Tiramani. 'People have the right layers of dress and the right articles of clothing. These are not fake theatrical versions of historical dress.'

'We're not allowed to cheat, so that means no automatic poppers to make a quick change easier. All the ribbons and buckles are real. If you have the right costume, you act and interact in the style of the period - it helps enormously when you're slipping into another century,' says tenor Jonas Kaufmann who sings the title role.

Watch the cast and creative team offer an insight into what it takes to design costumes for an authentic period production: